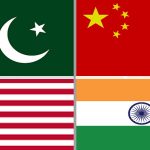 Pakistan has been executing a master plan in terms of foreign policy, as of late. One of the foreign ministries major goals is improving relations with all immediate neighbouring countries. As the War on terror shows no signs of winding down as expected under Obamas administration, Pakistan has made its official foreign policy to support […]

Ever since the end of World War-II, America has stood squarely on the shoulders of its air superiority, vastly outclassing any opponents in both fixed wing and (after Vietnam) rotor aircraft. So much so, that during the cold war, the Soviet doctrine was so heavily slanted against the US air domination that its entire doctrine […]