* 'A number of Pakistani singers including ghazal maestro Mehdi Hassan, Salim Raza, Alam Lohar and others had made an important contribution to ignite
a spirit in people' 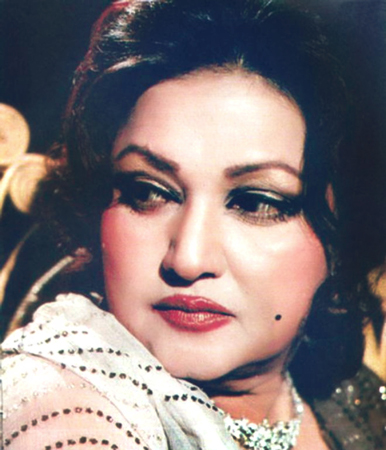 Former Pakistani ambassador Manzoorul Haq on Monday said that ‘Melody Queen’ Noor Jehan was a legendary female singer of the subcontinent, who infused a new spirit of patriotism in the entire nation and motivated the Armed Forces of Pakistan during the 1965 war.

Talking to APP, he said history of 65 war would remain incomplete without mentioning the matchless services of Noor Jehan whose motivational songs had injected new spirit of patriotism and national cohesion in the entire nation as well as the armed forces.

“A number of Pakistani singers including ghazal maestro Mehdi Hassan, Salim Raza, Alam Lohar and others had made an important contribution to ignite a spirit in people and soldiers but it was Noor Jehan who infused a new spirit of patriotism and nationalism in people of Pakistan and encouraged our valiant soldiers defending the country’s borders through her songs.”

He said, “Madam Noor Jehan was the first choice of writers, poets and lyricists, who had written excellent poetry for motivation of the nation and troops fighting on borders besides paying rich tributes to all those soldiers who sacrificed their lives for defence of Pakistan.

“The iconic female singer had promoted the spirit of patriotism, national cohesion and created hope in the nation in general and the armed forces in particular after India imposed war against Pakistan in 1965.”

He said, ‘Madam Noor Jehan was the first choice of writers, poets and lyricists, who had written excellent poetry for motivation of the nation and troops fighting on borders besides paying rich tributes to all those soldiers who sacrificed their lives for the defence of Pakistan’

“Noor Jehan through her songs had shown the enemy that our nation and armed forces were equipped with unwavering faith, unity and self-confidence and cannot be demoralized by evil and ill-willed designs of adversary.”

He said her songs had sent waves of patriotism, nationalism in the country and every Pakistani was ready to sacrifice life and fight side by side with our brave armed forces to thwart nefarious designs of the enemy.

“Noor Jehan was not simply a singer but a brave daughter of the nation, who personally visited borders to encourage soldiers of Pakistan.”

As a national singer, she served the country both in times of war and peace and her services in the 65 war were highly praised by the government of Pakistan.

On March 23, 1966, Field Marshal General Ayub Khan had acknowledged her services and maintained that half of the credit of 1965 victory went to Taranum Noor Jahan.

Born at the residence of Madad Ali at Kasur Punjab during British India on September 21, 1926, she started singing at the age of five at home under the guidance of her father Madad Ali and mother Fateh Bibi who were both professional singers.

In early age, she proved her mettle in all forms of singing including ghazals, folk, national, playback and sang thousands of hit songs to music and film industry.

She sung over 20,000 songs in various languages including Urdu, Punjabi, Sindhi, Hindi and her playback singing was considered a guarantee for success of films.

Noor Jehan was one of the greatest and the most influential singers of all time in South Asia, who was given the title of Malka-e-Tarannum in Pakistan.

She had a complete command of Pakistani and Hindustani classical music besides other music genres that separated her from all contemporary singers in the subcontinent.

The Melody Queen holds a record for having given voice to a largest number of film songs in the history of Pakistani cinema besides having made over 40 films on social, cultural, national and other important issues as producer and director.

Her films Zeenat, Dupatta, Anarkali, Intezar and others had broken all records of popularity and promoted the cinema industry in Pakistan.

She was decorated with the Presidential Performance Award for her matchless services during 1965 and 15 Nigar awards for promoting music and film industry in Pakistan.

She was awarded Tamgha-e-Imtiaz for boosting morale of Pakistan Army during war in 1965, Sitara-e-Imtiaz, Millennium Award and PTV’s Voice of the Century title.

The melodious voice of Malika-e-Tarannum had crossed borders and touched hearts of millions of people irrespective of caste, religion and nationality in the subcontinent and abroad.

The services of the iconic singer have been acknowledged even by rival Indians singers in high esteem. Indian legend Muhammad Rafi had wished to sing with Noor Jehan.

The celebrated singer of Pakistan left this mortal world on December 23, 2000 after suffering a severe heart attack in Karachi. Although Noor Jehan was not among us today, her historic songs, especially of 65 war, were still a great source of inspiration for the entire nation and young soldiers of Pakistan.