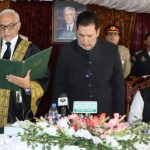 Government of Gilgit baltistan to conduct first ever GB Career Festival 2022 for students of GB professionals from all over country will share their experiences to inspire the students. Chief Secretary Mohiy Ud Din wani talking to media said that for quality education in GB and the career festival would be a landmark in achieving […]

A three-day polo festival at the highest polo ground of Shandur ended with Chitral as victorious after defeating Gilgit team by one goal. The highest polo festival resumed after two years gap due to COVID-19. The festival was organized by the administration of Chitral, in which thousands of tourist and polo lovers attended at Shahndur, […]