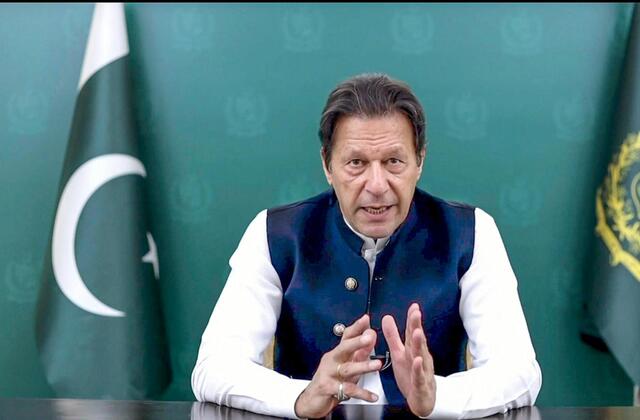 ISLAMABAD: Prime Minister Imran Khan on Friday mentioned that a powerful country was enraged with Pakistan because of his visit to Russia.

Addressing the Islamabad Security Dialogue, the premier said that the “powerful country” is supporting its ally, India. “Today I read the statement of the British Foreign Secretary that mentioned that they cannot say anything to India as it is an independent state — I don’t blame them for this support, this is our mistake,” he said.

Taking a jibe at the Leader of the Opposition in the National Assembly Shahbaz Sharif, he said: “Those who are preparing to get to the Prime Minister’s Office are giving interviews that my statements will piss off America and Pakistan cannot survive without its support.”

He further accused the Opposition, saying that these leaders have sacrificed Pakistan’s economy and humiliated the country in the world because of their benefits.

Addressing the ongoing controversy regarding the “threat letter”, apparently sent by the US, the premier said that an honourable person is always respected, questioning if a country can threaten another country.”

On Thursday, talking about the “threatening memo” that the PM claimed to have received against his government from a foreign country, he named the United States to be behind the conspiracy.

In an apparent slip of the tongue, he named “the United States…” but quickly moved on and stated that “a foreign country” had sent a “threatening memo” which was against the Pakistani nation.

PM Imran Khan said the decisions of previous politicians’ have led to a situation wherein no foreign country respects Pakistan. “They order us. They say that if the no-confidence motion does not become successful, there will be consequences for Pakistan.”

The two-day dialogue will bring together Pakistani and international policy experts to discuss emerging challenges in international security under the theme “Comprehensive Security: Reimagining International Cooperation”.

The Islamabad Security Dialogue will host 17 international speakers from the United States, China, the United Kingdom, Russia, European Union, Japan, Philippines and others.