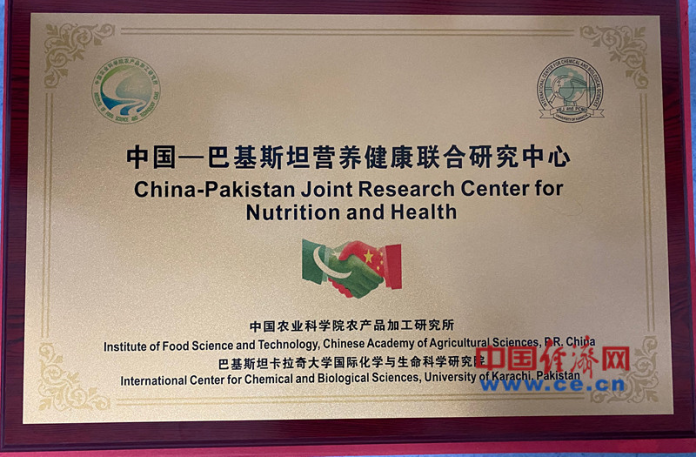 BEIJING: The China-Pakistan Joint Research Center for Nutrition and Health unveiled in Beijing, China and Karachi respectively on the sideline of the 2021 Sino-Pakistan Conference on Research and Application of Food and Medicinal Resources both online and offline.

The center is launched jointly by the Institute of Food Science and Technology (IFST) of the Chinese Academy of Agricultural Sciences (CAAS) and International Center for Chemical and Biological Sciences (ICCBS), University of Karachi, China Economic Net (CEN) reported on Wednesday.

At the launching ceremony, Wang Fengzhong, Director of IFST, expressed that IFST would carry out projects under the MOU of Sino-Pakistan science and technology agreement signed this year, and research the medicinal and food plant resources and their benefits to humans, to strengthen the traditional friendship between the two iron brother nations.

Dr. Muhammad Iqbal Choudhary, Dean of ICCBS, hoped to have more cooperation with China in the medicinal and food plant resources and education and training, on the basis of the foundation of the Sino-Pakistan Cooperation Center on Traditional Chinese Medicine (SPCCTCM).

Choudhary expected that a public academic platform could be established to strengthen the two nations’ synergy in sci-tech innovation and draw more young scientists to take part in.
Dr. Atta ur Rahman, Chairman of Prime Minister’s Task Force on Science and Technology, pointed out that the two nations have established SPCCTCM.

The Sino-Pakistan Cooperation Center on Traditional Chinese Medicine has been set up respectively in the University of Karachi, in Pakistan and the Hunan University of Medicine in Hunan province, China.

SPCCTCM will carry out various cooperation between the two nations, including R&D of drugs and healthy and nutritious foods, academic and cultural exchanges, talents training, medical treatment, and industrial cooperation.

The 2021 Sino-Pakistan Conference on Research and Application of Food and Medicinal Resources is organized by Wang Qiong, vice director of SPCCTCM, professor of IFST of the Chinese Academy of Agricultural Sciences.

The launch of the China-Pakistan Joint Research Center for Nutrition and Health is part of the two iron brother nations’ cooperation in traditional medicine.