11 killed as van crashes into pillar in Sargodha’s Bhera 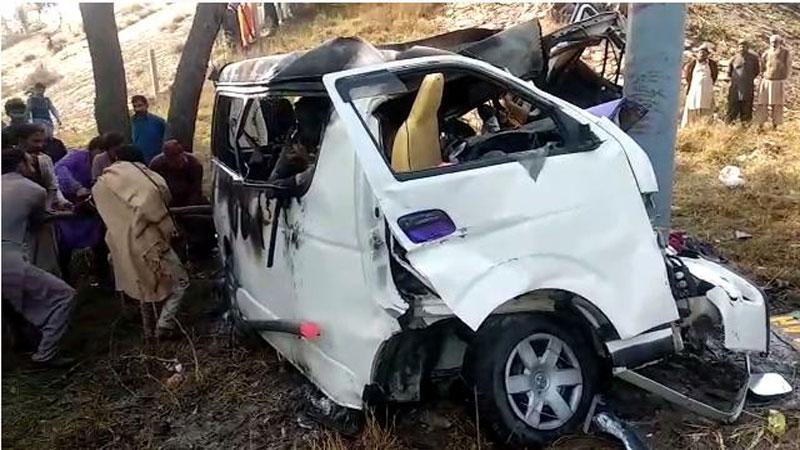 At least eleven people were killed and seven others sustained injuries in an accident in Bhera police limits when the van crashed into a pillar, police said Thursday.

According to police sources, the passenger van was travelling from Lahore to Islamabad on Motorway when the rashly driven van caughtes fire due to short circuit and collided with a pillar of Sappanwalal Bridge; as a result, 11 people were killed.

Rescue teams shifted the injured to THQ hospital Bhera. The condition of three injured was said to be critical. Chief Minister Usman Buzdar expressed grief and sorrow over the loss of precious lives in van fire tragedy in Sargodha.

He offered his condolences with the bereaved families and prayed for the recovery of those injured in the incident. The CM Buzdar also took notice of the incident and has summoned a report from authorities.

Earlier on January 11, at least six people were killed when a pickup van in which they were travelling caught fire after a collision with a rickshaw at North Karach

The shocking accident occurred at two-minute round about Chowrangi, area of Karachi when a pickup van caught fire after a collision with rickshaw. According to family sources, all people were going to attend a wedding ceremony.

Police and the rescue teams reached the scene immediately after being notified about the incident and managed to control the fire.

The deceased include husband, wife and four children. Five other people also received burn wounds as a result of the collision between car and rickshaw. The injured have been shifted to a nearby hospital, said rescue sources.