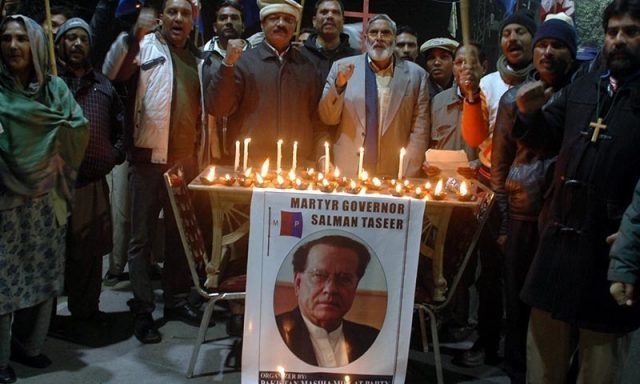 Former Governor of Punjab Salman Taseer, who was killed by one of his bodyguards in the capital, Islamabad on January 4, 2011 for speaking in favor of repealing Pakistan’s controversial blasphemy laws, according to which a person found guilty of blasphemy can be sentenced to death. Salman Taseer had also asked for official pardon of an illiterate woman, Aasia Bibi, who had been sentenced to death by Pakistani courts after being accused of blasphemy.

Taseer was one of Pakistan’s most brave and outspoken moderate politicians whose stance against extremism appears to have cost him his life.

Taseer had the courage to stand up for a woman from a religious minority, who was imprisoned because of a particular law.

On the other hand ,January 4, remains one of the darkest days in our history of political murders, a day that is, surprisingly, not spoken of enough.

January 4, 2011, was the day when the serving Governor of Punjab, Salmaan Taseer, was shot dead by his guard, because the guard was in disagreement with Taseer’s opposition to the blasphemy law. Salmaan Taseer’s assassin was a man called Malik Mumtaz Hussain Qadri.

After 8 years of taseer’s death, the woman he stood up for has finally acquitted and will not face the death penalty as a lot of people had demanded and expected. Salmaan Taseer lost his life because of publicly speaking up for Asia Bibi and on 31, oct 2018 as the landmark decision was given by the Supreme Court of Pakistan, people are remembering Salmaan Taseer and his sacrifice for justice.

You live on. We have won today against bigotry fanaticism and downright stupidity.