A large number of people have started to take to social media to pay tribute to the slain Punjab governor Shaheed Salman Taseer on the occasion of his 9th death anniversary which is to be marked on Saturday. 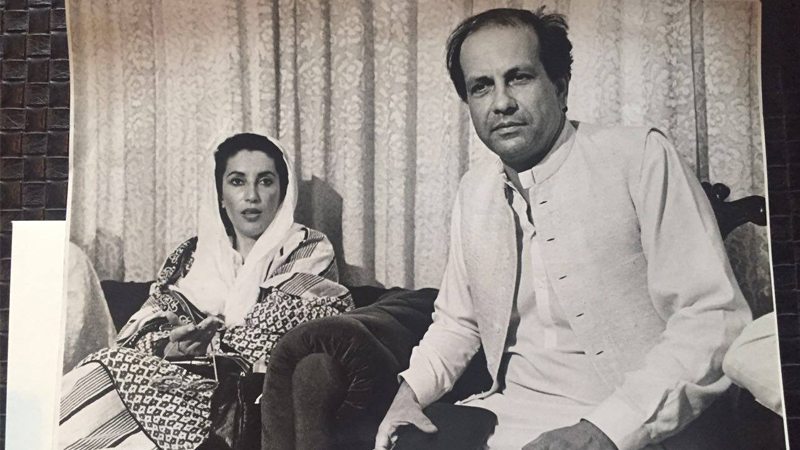 Salman Taseer was shot dead by one of his own bodyguards in broad daylight in the federal capital Islamabad on January 4, 2011, allegedly because Taseer had defended a Christian woman, Asia Bibi, who was accused of blasphemy.

Salmaan Taseer’s legacy will forever be etched in the history of Pakistan. On his 9th death anniversary, Daily Times pays tribute to the man.

Political figures and civil society activists will hold ceremonies to mark Saturday evening and special prayers are to be offered at his residence.

Different users on Twitter from around the world tweeted.

“You can kill a man, but not an IDEA”.( Shaheed Benazir Bhutto)..
A brave son who sacrificed his life for the sake of sincerity.

Mansoor Chandio stated, “You can kill a man, but not an idea”.

Also, his death sentence was the bravest decision taken in the history of Pakistan. Though hanging this moron could not bring back the intellectual& benign asset Sir #SalmanTaseer; he will be missed always,but the evil met his fate, wch will keep alive the legacy of Taseer sb.

Mumtaz Qadri was later hanged to death after being sentenced by the country’s judicial system.

A message Salman Taseer sent out during his last days sum up his views on what turned out to be the last of his many battles.

As a man keen to stay abreast of times, he tweeted on the Internet only days before his assassination.

I was under huge pressure sure 2 cow down b4 rightest pressure on blasphemy.Refused. Even if I’m the last man standing

“I was under huge pressure sure 2 cow down b4 rightist pressure on blasphemy. Refused. Even if I’m the last man standing.”

His violent death adds another bloodstained chapter to the history of a country that has been frequently held hostage by agents of hatred.

Taseer was born in 1946. His father Mohammad Deen Taseer (famously known as M.D. Taseer) was a poet and guides to legends like Faiz Ahmed Faiz as well as being one of the founders of the Progressive Writers’ Movement in the 1930s.

His mother Christabel (Bilquees) was a British leftist activist and elder sister of Alys, later Alys Faiz. The two sisters had left their homes and come to India where they met their future husbands.

Taseer studied at Saint Anthony’s School and the Government College Lahore — institutions where he was a few years senior to Nawaz Sharif.

In the 1960s, he went to England to study accountancy. Early in his professional career, he successfully set up two chartered accountancy and management consultancy firms in the UAE and Pakistan.

In 1994, he established First Capital Securities Corporation Limited (FCSC), a full-service brokerage house and had been actively involved in establishing other companies in the financial services sector as well as telecommunications, media, insurance and real estate/property development sectors in Pakistan.

Taseers’s association with the Pakistan People’s Party went way back in time. In his maiden speech after taking charge as governor of Punjab in 2008, he declared that he wanted to turn Lahore into another Larkana for the PPP.

He was elected to the Punjab Assembly from Lahore in the 1988 elections.

Taseer was among the PPP stalwarts who were drawn to Gen Pervez Musharraf, even though he did not formally join the general’s establishment until agreeing to be a federal minister for commerce and industry in the caretaker set-up of Muhammadmian Soomro in 2007-08.

Over the next two and a half years, Taseer was involved in a war of words with the PML-N, especially Shahabz Sharif’s law minister Rana Sanaullah.

Salman Taseer was not known to take any accusation leveled against him lying down and would react with anger to anything that was thrown his way.

Taseer remained defiant in the face of punches thrown at him.

Taseer was also tortured by police in November 1992 when Nawaz Sharif was the prime minister — an incident which he later remarked had rid him of all fears.

In what could have led to his assassination, he also followed a line on the blasphemy law which was independent of the PPP. He spoke with passion about the case of Aasia Bibi who had been sentenced to death by a lower court and even committed to seeking a presidential pardon for her.

This landed Taseer in trouble with a group of people who accused him of trying to protect a blasphemer. There were protests outside the Governor’s House in Lahore and rallies in other parts of the country. Some relatively less known clerics issued edicts calling for his head. This led to concerns being expressed about his safety, something he himself was not always too bothered about.