The Supreme Court on Tuesday ordered demolition of all chambers illegally constructed by lawyers on a football ground in Islamabad, ordering lawyers to immediately vacate the site. A three-member bench headed by Chief Justice Gulzar Ahmed and comprising Justice Ijaz ul Ahsan and Justice Mazahar Ali Naqvi heard the case related to the ransacking of […]

The Supreme Court on Monday announced its opinion on the presidential reference regarding open balloting in Senate elections, maintaining that the March 3 polls will be held through secret ballot, according to Article 226 of the Constitution. The 4-1 majority opinion was announced by a five-member larger bench of the Supreme Court, headed by Chief […] 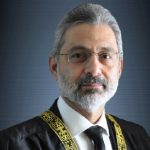 Justice Qazi Faez Isa of the Supreme Court on Saturday raised objection to the apex court’s February 11 judgement barring him from hearing cases involving Prime Minister Imran Khan. In a 28-page dissenting note to the February 11 order, the apex court judge not only stated that the verdict and the events leading up to […]

The Supreme Court on Friday said that the representation of a political party in Senate should be proportional to the strength of the party in the provincial assembly. A five-member larger bench headed by Chief Justice Gulzar Ahmed and comprising Justice Mushir Alam, Justice Umar Ata Bandial, Justice Ijaz ul Ahsan and Justice Yahya Afridi […]

Chief Justice Gulzar Ahmad said it is unfortunate that PPP and PML-N are deviating from the Charter of Democracy (CoD), in which they agreed to end corrupt practices in the Senate election. “I can’t say whether horse trading will end or not,” he said and added that Article 59 did not mention secret voting. The […]

The Supreme Court on Wednesday observed that that buying and selling of votes will violate the principle of proportional representation in the Upper House and the system will be destroyed if a party takes seats out of proportion. The chief justice remarked that the Senate elections may be secret but the seats should be as […]

The Supreme Court on Tuesday declared the report of the Election Commission of Pakistan (ECP) on Senate elections ‘unsatisfactory’ and summoned the chief election commissioner and other officials again on Wednesday (today). During hearing of the case, the chief justice remarked that steps are not being taken to curb corrupt practices. “The ECP cannot be […] 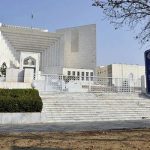