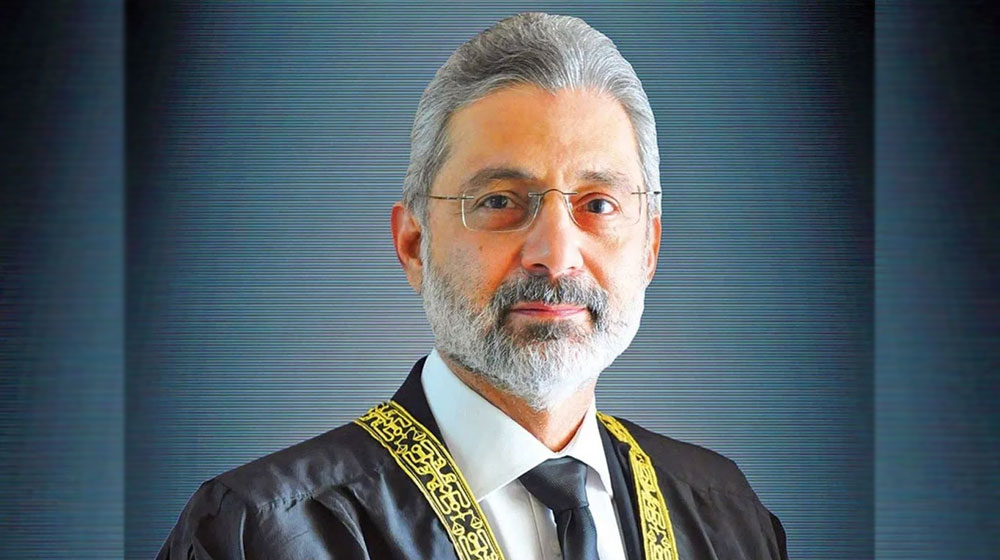 In a 28-page dissenting note to the February 11 order, the apex court judge not only stated that the verdict and the events leading up to it suffer from the improprieties and illegalities but also underscored that the decision undermines the judiciary and the Supreme Court.

In his dissenting note, Justice Isa said that a ruling cannot be legal until it is signed by all the judges. He said that the oath of office of a judge requires him to hear all cases. “If a judge is restrained from hearing a genre of cases, then his salary, judicial allowance, housing, utilities, etcetera, paid by the taxpayers is effectively wasted because they are not getting what they pay for,” he maintained.

Justice Isa said the Election Commission of Pakistan is mandated to conduct elections and to ensure that they are conducted honestly, justly, fairly and that corrupt practices are guarded against. “The ECP also conducts the Senate elections. The Election Commission did not take notice of the present matter of ‘development funds’ said to have been promised by the prime minister. Therefore, this court cannot ignore the matter, nor the documents, as it needs to be ascertained whether the constitution was violated,” he added.

Justice Isa said that no one had alleged bias or lack of impartiality against any judge on the bench. “Without consulting his colleagues on the bench, the chief justice tersely announced that a judge of the Supreme Court should not hear any case involving the prime minister. The Hon’ble Chief Justice arbitrarily introduced a non-issue-bias and lack of impartiality on the part of a judge on the bench,” he said. “Loyalty is always to the constitution, which needs remembering and restating. If the head of an institution deviates, he must be reminded. The constitution commences with Almighty Allah’s name and so too do all oaths,” he added.

He pointed out that without informing the two-member bench, which was already hearing the matter, the chief justice decided to reconstitute the bench, expand it and exclude Justice Maqbool Baqar from it. He further objected that the judge was not made privy to the written order and that the order was sent to a junior judge while the said judge, his senior, was bypassed. “The ‘Order of the Court’ was not written and thus, not signed, therefore, there is no Order of the Court and the matter remains pending,” he stated, adding that the order was uploaded on the Supreme Court website before a judge had seen it, let alone had the opportunity to agree or disagree with it. “The order and case file were not sent, in accordance with long-standing established practice, to the said judge and the said Judge learnt of the order through the media,” Justice Isa said in the note, underscoring that he had to late write to the registrar to seek the order and case file.

“Prime Minister Imran Khan reported statement said that money from the public purse would be disbursed for apparent political patronage at a time when the Senate elections were on the horizon, therefore, notice was issued by the two-member bench, however without a proper determination, and without ascertainment of the veracity and effect of the documents, the matter was abruptly disposed of,” Justice Isa said, adding paragraph 6 undermines the judiciary and the Supreme Court.

“What commenced as an attempt to prevent corrupt practices and bribery ended with a Judge being rebuked and restrained,” Justice said in his note, adding that submitting a resignation letter was contemplated. “But then I remembered that this is not about a judge and his mistreatment. It is about something far more important; the Constitution, the peoples’ rights and their monies. All of which I have, with Almighty Allah’s help and grace, endeavored to protect and will (insha’Allah) continue to do so,” he added.

“In conclusion, I must say that it has been extremely painful for me to write this order. I apologise if anything herein has hurt or offended as that has not been my intention. I have said what I felt I needed to say in the hope that unstructured discretion is curtailed. Since it has never served any institution nor the interest of the people. To end on a positive note, the most resilient and finest institutions are those wherein there is candour, transparency and legitimate dissent,” he said, adding that he prays that courts stand against all manner of constitutional violations and safeguards the people against misuse of power.