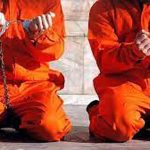 The family of a Pakistani businessman, who is the oldest prisoner at the notorious Guantanamo Bay jail, excitedly awaits his return after more than 17 years as the US government approved his release earlier this week. The family which lives at a high-end locality of the southern port city of Karachi received the news with […]

At a time when fears of a demographic invasion are running rife in Indian administered Kashmir, a government website has declared the conflict-ridden Muslim majority region a Hindu majority. The InvestJK website, run by the Industries and Commerce Department, describes under its heading on Temples that, “be it Kashmir or Jammu, the population is predominantly […]