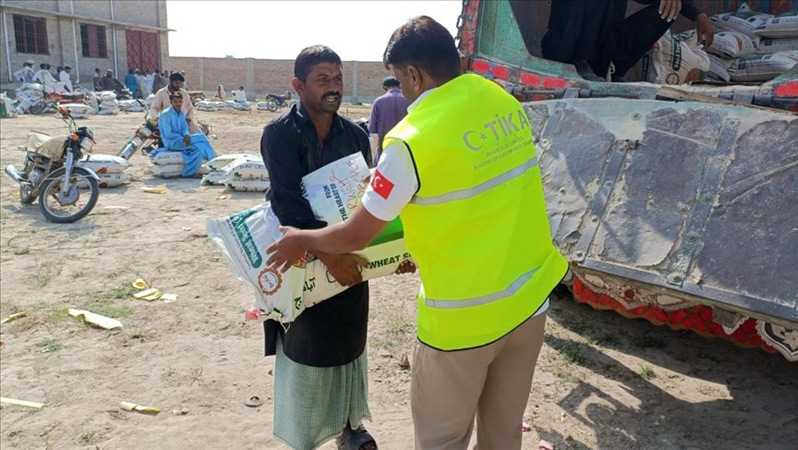 Türkiye’s state-run aid agency is assisting flood-battered farmers in Pakistan to mitigate a looming threat to food security caused by recent super floods and rains that inundated millions of acres of croplands across the South Asian country.

The Turkish Cooperation and Coordination Agency (TIKA) has launched a program to provide wheat seeds to thousands of farmers to help them grow crops in southern Sindh and southwestern Balochistan provinces that have been severely affected by the near-apocalyptic floods.

Wheat is the main winter crop and a major source of income for millions of farmers across Pakistan.

The TIKA held the latest ceremony in Matiari district to provide wheat seeds to over 100 farmers in collaboration with Sindh Agricultural University in Tandojam, Hyderabad district, and the Rural Agriculture Extension Department Sindh, according to a statement issued by the Turkish relief agency on Friday.

Basaran said at the ceremony that the program is aimed at assisting small-scale farmers who have suffered huge losses in terms of ready-to-reap crops and cash due to massive floods and rains.

Since the floodwaters have receded, he further said, now seeds and fertilizers are the key requirements of the millions of farmers in the flood-hit areas.

One of the program’s beneficiaries, Ghulam Mustafa, thanked Ankara for its support, saying, “We always heard about the friendship and brotherhood between Türkiye and Pakistan, but today we have witnessed it.”

Türkiye has so far sent 15 planes and seven trains loaded with relief goods, including tents, boats, food items, medicines, vaccines, and other items on the instructions of President Recep Tayyip Erdogan.

Türkiye’s Disaster and Emergency Management Authority (AFAD) has also set up three “tent cities” in Dadu, Hyderabad, and Noshero Feroz districts of Sindh, providing temporary housing to some 3,000 flood-affected people.a
Aside from killing over 1,700 people, the drenching monsoon that began in mid-June and lasted until late September, inundated a third of Pakistan, washing away hundreds of thousands of houses, schools, bridges, and animals and destroying millions of acres of cropland. The massive floods have caused $30 billion in losses to the country’s already struggling economy, mainly in infrastructure and agriculture. Anadolu