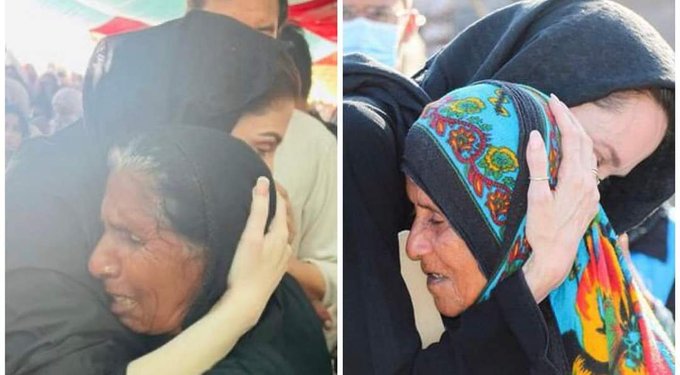 She said that they will not abandon those who have been severely impacted by the floods during this difficult period. Maryam Nawaz further stated that the flash floods have caused huge destruction. “Taunsa has been surrounded by the calamity. We will sit in our houses till rehabilitation of the flood victims,” she added.

“The politics causing a loss to others has no benefit,” she maintained.

Moreover, she also listened to the complaints of the women and distributed relief goods among the victims.

Some people are calling it a mere coincidence and some netizens are thinking it’s very intentional. Apart from the dress, Maryam Nawaz’s picture poses to console the flood victims are quite the same as Angelina Jolie consoled the families.

epic! she and her photographer made it sure Angelina Jolie pose is 100% copied and captured! https://t.co/OXKR1OhVUf

Twitterattis find out exact similarities between Maryam Nawaz Sharif and Angelina Jolie meeting with the flood victims, be it attires selection or the picture poses.#pakistanrepublic pic.twitter.com/BAsteB8m8h

One is a great actress
Next one is just Angelina Jolie. pic.twitter.com/a7M3uURazs

Who is responsible for all the human errors due to which thousands die every year? pic.twitter.com/D0K4kjtHpV

Can’t believe she spent crores of rupees on official protocol just to have a photo shoot like Angelina Jolie with the flood victims.