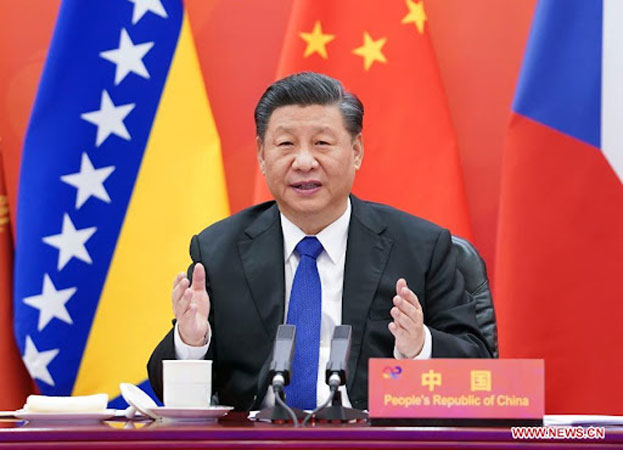 Chinese President Xi Jinping on Monday sent a message of condolence to his Pakistani counterpart, Arif Alvi, over the severe floods hitting the country.

The Chinese president noted that severe floods have occurred recently in Pakistan, causing heavy casualties and serious property losses. Xi, on behalf of the Chinese government and people, and in his own name, expressed deep condolences over the victims and sincere sympathy to the bereaved families, the injured and the people in the affected areas.

Xi pointed out that as all-weather strategic cooperative partners and “ironclad” friends, China and Pakistan have been sharing weal and woe for a long time, reaching out to each other and responding to major challenges such as natural disasters side by side. After the floods struck, China has responded immediately, and will continue to provide urgently needed assistance to Pakistan and support the country in its disaster relief work, he said.

Xi also said he believes that with the joint efforts of the Pakistani government and people, those in the disaster-hit areas will surely overcome the flood and rebuild their homes as early as possible. On the same day, Chinese Premier Li Keqiang sent a message of condolence to Pakistani Prime Minister Shahbaz Sharif

China will continue to enhance cooperation with Pakistan in disaster prevention and mitigation as well as global climate response and provide more assistance to Pakistan in its flood relief efforts and post disaster reconstruction, Chinese Foreign Ministry Spokesperson, Zhao Lijian said on Monday. “Recently, on television, through newspapers and online, we have seen a lot of information on the ravaging floods in Pakistan, which are heart wrenching,” he said during his regular briefing in response to a question asked by APP regarding devastated floods caused by heavy monsoon rains in Pakistan.

The spokesperson said, “China and Pakistan are all weather strategic cooperative partners and true friends and good brothers sharing weal and woe. Since, Pakistan was hit by the floods, our thoughts have been with the people in the affected areas. We feel deeply for the Pakistani side in this difficult time.” He informed that China’s State Councilor and a Foreign Minister Wang Yi expressed sympathy to his Pakistani counterpart Bilawal Bhutto Zardari upon learning the news of the floods. Zhao Lijian said, under the social and Livelihood Cooperation Framework of China-Pakistan Economic Corridor (CPEC), China has provided 4000 tents 50,000 blankets and 50,000 pieces of tarpaulins to Pakistan. They have been delivered to the frontline of disaster relief.

He remarked a ruthless disaster can bring out the best of humanity, adding, “We will not forget that in the wake of the Wenchuan earthquake in 2008, the brotherly Pakistani people rushed to our assistance and sent all their tents in reserve to the earthquake-stricken area in China. The Chinese people were deeply moved.” Now as the Pakistani people grapple with the floods, the Chinese side is standing with them. Going forward, China will continue to enhance cooperation with Pakistan in disaster prevention and mitigation and global climate response and provide more assistance to Pakistan in its flood relief efforts and post disaster reconstruction.