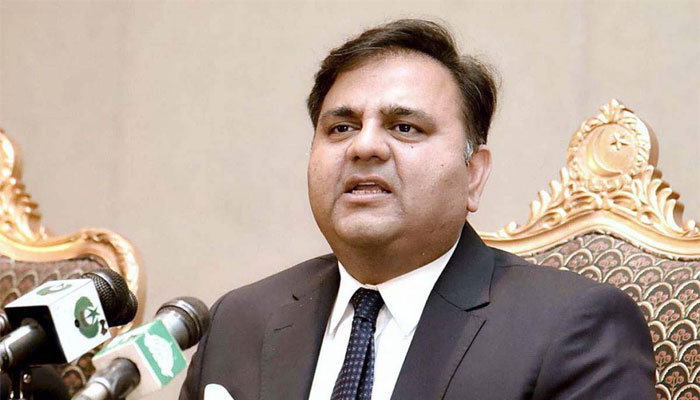 ISLAMABAD: Former minister for information and broadcasting Fawad Chaudhry Thursday berated the coalition government, saying that it has “started a new episode of barbarism”.  Speaking during a press conference, the PTI leader said that the government was “forcefully picking up women and children and inflicting violence upon them”.

Earlier today, the Islamabad Police took the wife of Shahbaz Gill’s driver in custody after they raided the latter’s residence to recover the PTI leader’s mobile phone for investigation in the sedition case being pursued against him.

“The coalition government is taking these people into custody, saying these people were running campaigns against the army on the directions of Imran Khan,” said Fawad, adding that the PTI chief has all his assets in Pakistan and wants its army to be strong.

“How will Pakistan survive if the army and the nation’s institutions are not strong?” he questioned.

The former minister said that Khan has done everything for the people of Pakistan and the army is also a part of this country. “The government is trying to pit the army against the PTI and this plan is absolutely childish.”

Talking about the arrest of Ammad Yousuf, who is the head of ARY News, Fawad said that the police took him into custody late at night which has been traumatic for his children.

“The government did the same on May 25 and later, they started charging the party leaders with blasphemy cases,” he added.

Criticising the incumbent cabinet, the former information minister said that these leaders do not deserve to go anywhere. “Be it Saudi Arabia or any part of the world, people will take their shoes off as soon as they see these people.”

Fawad said that the Ministry of Information was sinking under the coalition government, adding that it is an insult to call Marriyum Aurangzeb the information minister.

He said that Nawaz Sharif was disqualified because had not declared his companies outside of Pakistan. He added that the Sharif family was laundering money through other companies. “These two families stole money and kept it in London and Dubai,” he added.

Talking about the party’s public gathering on August 13 in Lahore Hockey Ground, Fawad said that the PTI will install a new turf on the ground. “PTI will bear all the expenses of the jalsa,” he said.