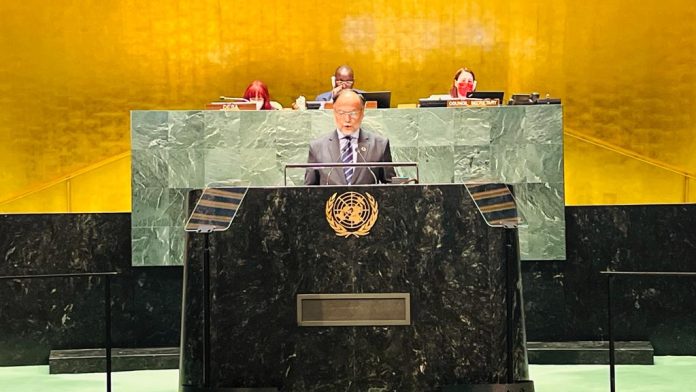 NEW YORK: Pakistan proposed on Thursday a debt relief of $1 trillion for debt-ridden developing countries, in addition to the establishment of a Global Debt Authority and an Independent Credit Rating Agency for the purpose.

He estimated that a $1 trillion annual investment was required, with 70% going to developing countries, to ensure a global transition to sustainable infrastructure.

Delivering his speech at the Ministerial Roundtable titled “Accelerating achievement of the SDGs by 2030: addressing on-going crises and overcoming challenges”, the minister said the world was facing a triple crisis: Covid-19, Climate Change, and Conflict.

Covid-19 has reversed a decade of progress toward the Sustainable Development Goals (SDGs). After many decades of steady decline, extreme poverty is on the rise. It is estimated that 255 million full-time jobs have been lost. The global economic contraction has reached 5% and for many developing countries 15 to 20%, he added.

The minister said the current war in Ukraine and the accompanying restrictions have been coup de grâce for the poor: prices have spiraled; food and related commodities, including fertilizers, are in short supply and unaffordable for the poorest people and the poorest countries.

The looming climate catastrophe has already increased the development cost for many developing countries, he said adding that this was happening against the backdrop of unsustainable debt burden, high borrowing costs, and hyperinflation. It is estimated that 60 percent of the developing countries are already at high risk of, or in, debt distress.

He said this should provide access to food and energy supplies to all countries, especially developing countries, on an equitable basis.

“We hope that the UN Secretary-General will succeed in his diplomatic efforts to secure access to food supplies from both Ukraine and the Russian Federation.”

He also called for moderating the prices of food, energy and other essential goods for affected developing countries, including through an international fund set up for this purpose.

The most severely affected developing countries should receive immediate relief on both commercial and official debt payments in order to avoid a socioeconomic crisis.

He emphasized the importance of coordinating efforts to combat the COVID-19 pandemic. Vaccine equity must be ensured; production must be expanded, and distribution to all countries, particularly those in Africa and elsewhere that have fallen behind, must be accelerated.

“We also need the mobilization of longer-term finance to implement the SDGs and Climate goals.” Ahsan Iqbal demanded the fulfillment of the commitments made to provide $100 billion annually in climate finance.

He said at least half of the unutilized SDRs, amounting to $200 billion, should be provided to the developing countries as means of ensuring liquidity and fiscal space to respond to the multiple crises they are facing.

He proposed to utilize the UN system, the Multilateral Development Banks and other institutions; to help developing countries prepare a pipeline of viable infrastructure projects designed to promote the achievement of the SDGs.

He stated that developing countries must be treated fairly in international trade. The global trading system must be brought into line with the SDGs. This will necessitate revisions, particularly to the TRIPS and TRIMS agreements. New protectionism must be avoided, whether in the form of environmental or social conditions.

The minister also proposed harnessing the potential of the emerging digital economy, which he stated would necessitate bridging the North-South digital divide and preventing the formation of an East-West digital divide.