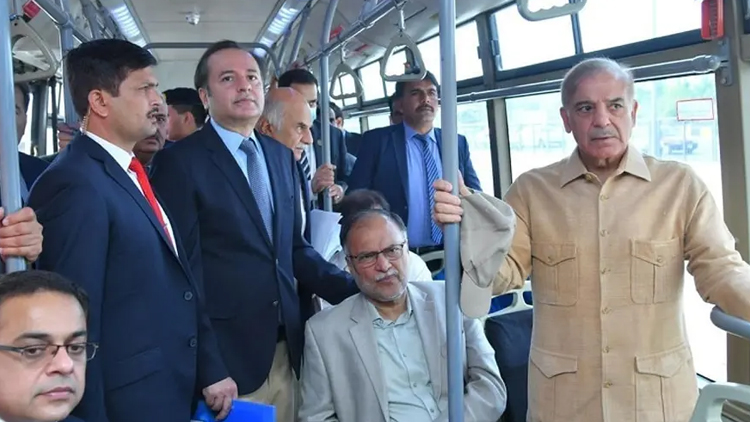 The bus service will run from Bahara Kahu to PIMS (Green Line), Koral to PIMS (Blue Line) where all the Green Blue service will merge with Red Line (Rawalpindi Islamabad Metro).

From Faiz Ahmad Faiz bus stop, the passengers can take Orange Line to Airport. The prime minister also laid the foundation stone of a Command and Control Centre for metro buses at Bhara Kahu, which will be completed in six months.

Speaking on the occasion, Interior Minister Rana Sanaullah said the service would accommodate the residents of Islamabad and adjoining areas as an affordable and decent transport service. He mentioned that Shehbaz Sharif throughout his political career took steps to facilitate the common man. CDA Chairman Amir Ahmed Ali said 30 buses from China had been added to the fleet to facilitate the services. He said from Koral to PIMS, 13 bus stations had been set up with headway of six minutes. Due to road construction up to Rawat, a bus shuttle from PWD will run. He said there are 8 stations complete on Green Line, whereas the rest of six stations would be completed by August 14.

A bus depot had been established at Bhara Kahu to save the dead mileage. The CDA chairman said a smart card would also be launched to be used on all bus services, including Rawalpindi’s Red Line.

The Command and Control Centre will be completed in six months. He said Islamabad was the first city in the country with four bus lines operating and vowed to expand in the capital’s sector areas at a stretch of 8-9 kilometres.