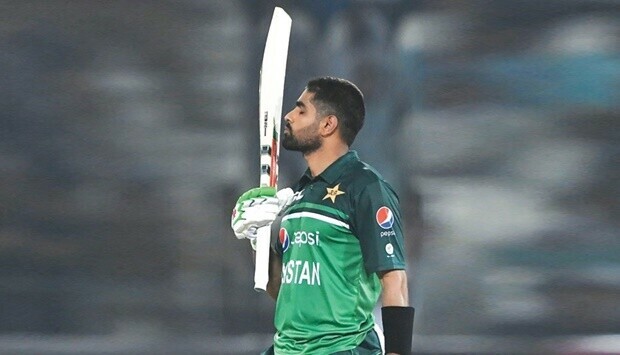 Opener Shai Hope knocked 134-ball 127 for his 12th one-day international century to help the West Indies post an impressive 305-8 their highest against Pakistan in Pakistan.

The win gives Pakistan a 1-0 lead in the three match series and 10 crucial points in the ODI Super League, a qualification process for 2023 World Cup (50 overs) to be hosted by India.

But once Azam and Mohammad Rizwan (59) fell in quick succession, Pakistan were in a spot of bother with 50 needed off 32 balls.

Khushdil Shah lived up to his big hitting and carted four sixes in his 23-ball 41 not out  three successive in Romario Shepherd’s 47th over before Mohammad Nawaz hit the winnings six in the final over.

Azam added 103 for the second wicket with Imam-ul-Haq who scored 71-ball 65 after opener Fakhar Zaman fell for 11.

Haq hit six boundaries before he gave an easy catch, failing to keep a reverse sweep down off spinner Akeal Hosein.

Azam added 108 with Rizwan for the third wicket and during that stand guided spinner Hayden Walsh to third man boundary for his 17th hundred in ODI cricket.

He also smashed three hundreds in successive ODIs against the West Indies in United Arab Emirates in 2016.

Former Sri Lankan Kumar Sangakkara hit four consecutive centuries in as many matches leads the chart with nine other batsmen have three successive centuries once each.

Azam holed out to paceman Alzarri Jospeh who finished with 2-55.

Earlier, West Indies, who won the toss and batted, were guided by Hope and Shamarh Brooks.

Hope, who cracked 15 boundaries and a six, added an innings-building 154 with Shamarh Brooks after the visitors lost opener Kyle Mayers for three in the third over, caught and bowled by pacer Shaheen Shah Afridi.

Fast bowler Haris Rauf, best of home bowlers with 4-77, ended Hope’s knock when he bowled him with a slower delivery in the 44th over.

The scorching Multan heat — with temperatures soaring to between 40 to 42 degrees Celsius (104 to 107 degrees Fahrenheit — did not stop Hope and Brooks, who both batted with guts and power.

He is the 11th West Indies batsman to reach the milestone in ODI cricket.

It was a brilliant one-handed diving catch by Shadab Khan off Nawaz at short third man that dismissed Brooks, but only after he helped Hope in recovery.

Skipper Nicholas Pooran hit three towering sixes in his 16-ball 21 while Rovman Powell made 32 off 23 balls and Shepherd took 25 off 18 as West Indies added 87 in the last ten overs.

West Indies’s previous highest against Pakistan in Pakistan was 258-7 scored in Karachi in 1987.

The second match is on Friday and third on Sunday, also in Multan.