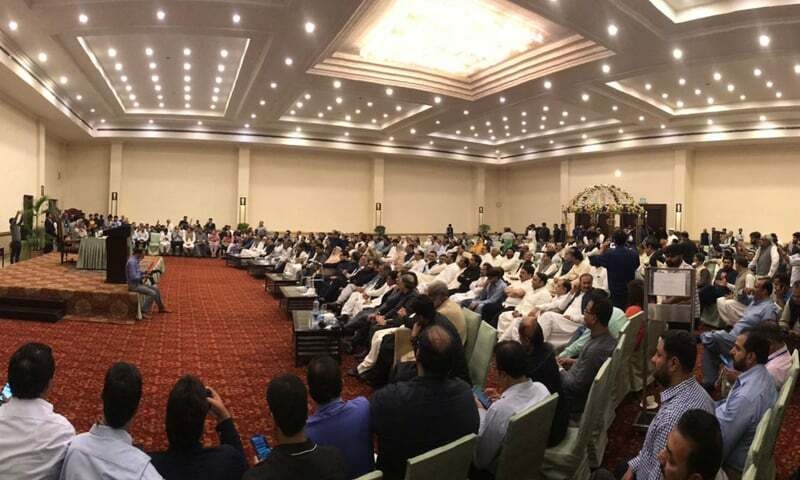 LAHORE: A symbolic session of the provincial assembly of Punjab was held by the opposition members at a local hotel and elected Hamza Shehbaz as leader of the house.

The PML-N claimed that 199 members of the Punjab Assembly, attending the symbolic session, voted in favour of Hamza Shahbaz as Punjab chief minister. The symbolic session was presided over by a panel of the chairperson Shazia Abid.

Earlier, two no-trust motions came in a single day, one against Speaker Chaudhry Pervaiz Elahi by the opposition and the other by the PTI against Deputy Speaker Sardar Dost Muhammad Mazari.

Later, addressing a press conference, Hamza Shehbaz thanked the members for expressing confidence in him and said that the matters of the province should be resolved at the earliest.

He said that the opposition parties had shown its majority and added that the majority of members of the assembly were standing with him. He thanked Aleem Khan, members of Jehangir Tareen and Asad Khokhar groups who announced support of the opposition.

He said that Chaudhry Pervaiz Elahi, being custodian of the house, should run the assembly as per law and the constitution. He said that the doors of the Punjab Assembly were closed for the MPAs which was very unfortunate.

Speaking on the occasion, Maryam Nawaz congratulated the people of the province on the election of Hamza Shehbaz as Chief Minister in a symbolic session.