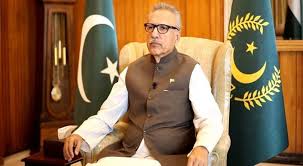 ISLAMABAD: President Arif Alvi Wednesday asked the Election Commission of Pakistan (ECP) to finalise a date for a new national ballot, as the Supreme Court adjourned a hearing into the legality of political manoeuvres that led to the dissolution of the Parliament.

The court — which will sit for a fourth day Thursday — must rule if the deputy speaker of the national assembly violated the Constitution by refusing to allow a no-confidence vote against Prime Minister Imran Khan last weekend.

Had the vote taken place, Khan was certain to have been booted from office, but the move allowed him to get the loyalist president to dissolve the Parliament and order an early election.

The Opposition has cried foul and is refusing to cooperate in forming an interim government to oversee any ballot, but on Wednesday, Alvi upped the ante. A statement from his office said the election commission had been told to propose a date “in order to carry out the mandate of the Constitution”.

While the Opposition applied its resources to the court, Khan effectively hit the campaign trail — telling party workers in Lahore late Tuesday that he would be more careful in picking candidates to stand for his PTI party. Khan’s woes started weeks ago when a group of rebel PTI lawmakers threatened to vote against him, but his fragile ruling coalition was beginning to unravel anyway.

There had been high hopes for Khan when he was elected in 2018 on a promise of sweeping away decades of entrenched corruption and cronyism, but he struggled to maintain support with soaring inflation, a feeble rupee, and crippling debt. Nuclear-armed Pakistan has been wracked by political crises for much of its 75-year existence, and no prime minister has ever seen out a full term.

Whether the election commission has the capacity to organise a ballot within 90 days remains to be seen, with a watchdog group warning this week of “grave concerns” for potential violence.

“The Free and Fair Election Network (FAFEN) has identified multiple constitutional, legal and operational challenges to the conduct of an early election,” said the group.

“Public confusion and political divisions that have already arisen as a result can potentially translate into violent expression.”

Khan has already blown anti-US sentiment into the political atmosphere by saying the opposition had colluded with Washington for “regime change”. The cricketer-turned-politician says Western powers want him removed because he will not stand with them against Russia and China, and the issue is sure to ignite any forthcoming election.

It is unclear when or how the court will rule on the issue — or if Khan would even accept its decision — but there is precedent. In 1988, Muhammad Khan Junejo appealed to the court after the assembly was dissolved by then-president General Zia-ul-Haq, who had taken power in a military coup years earlier.

It agreed his government had been dissolved unconstitutionally but ruled that since elections had been announced anyway it was best to move on. In 1993, the court ruled president Ghulam Ishaq Khan had also illegally dissolved the assembly — then with Nawaz Sharif as prime minister. The supreme court is ostensibly independent, but rights activists say previous benches have been used by civilian and military administrations to do their bidding throughout Pakistan’s history.

“I don’t think the court is going to deliver any noticeable decision, it will be a sort of doctrine of necessities,” said Ayesha Siddiqa, an independent analyst.

“On one side judges will declare the ruling of the deputy speaker as unconstitutional, but at the same time will justify the fresh elections…as every political party wants to go for a fresh election.”