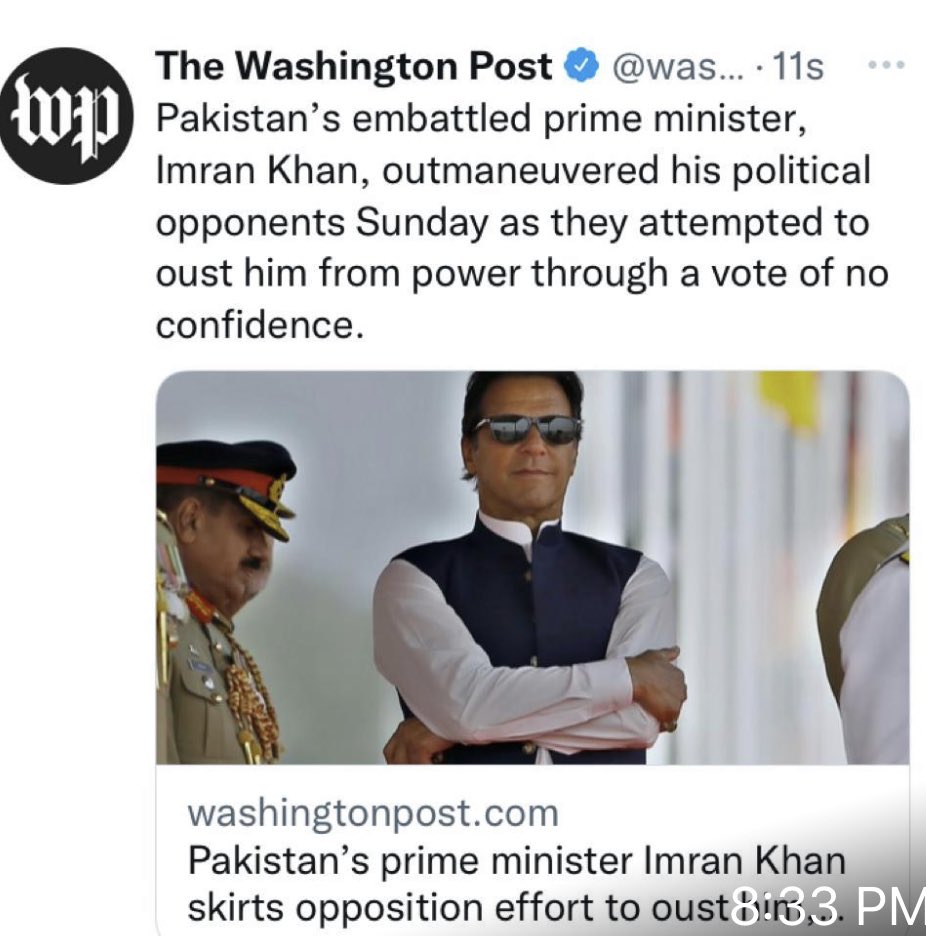 NEW YORK: The American print and electronic media is giving prominent coverage to the political developments in Pakistan, with The Washington Post saying that Prime Minister Imran Khan, “outmaneuvered his political opponents Sunday as they attempted to oust him from power through a vote of no confidence.”

“Within two hours,” wrote correspondent Pamela Constable, “Parliament had been dissolved at Khan’s request so the country can prepare for new elections.”

So far no editorial comment has been published, but news reports carried full details of the developments that have taken place since Sunday.

“But Khan, 69, a charismatic former cricket star who won office in 2018 after campaigning to reform a corrupt political system and bring justice to all Pakistanis, blamed the effort to remove him on a foreign conspiracy that he claimed was backed by the United States,” the Post said in a dispatch from Islamabad.

Correspondent Constable pointed out that the Pakistani leader has alleged that the U.S. administration was behind a plot to remove him from power, citing a private diplomatic cable that suggested Washington would be happier with new leaders in Pakistan.

The New York Times dispatch also said, “Mr. Khan has claimed that the opposition is acting in concert with the United States government to oust him, accusing an American diplomat of issuing a threat to Pakistan’s ambassador to the United States, noting that American officials have denied the allegation.

“Already on Monday, Mr. Khan appeared to be trying to whip up public support and push ahead with his plans to hold early elections, taking steps to establish an interim government before the Supreme Court issues its verdict,” Times’ correspondents Christina Goldbaum, Salman Masood and Zia ur-Rehman said in a joint dispatch.

“As Pakistan’s Prime Minister, Khan’s move on Sunday to force fresh elections after dodging a no-confidence motion against his government caught the opposition completely off guard as well.”

“But will it knock off the opposition,” correspondent Ravi Buddhavarapu asked in his commentary posted on CNBC’s website.

“Khan took a calculated gamble in his move to call for early elections,” Associate Professor Iqbal Singh Sevea, the director of the Institute of South Asian Studies at the National University of Singapore, was quoted as saying in the commentary.

“Imran Khan is betting on retaining his support base and the opposition splintering. The opposition parties are only united by the desire to topple Imran Khan’s government and are unlikely to be able to retain a united front,” he told CNBC on Monday.

The court ruling is the first step and there’s an “outside chance” that the court could still reverse Khan’s decision, Michael Kugelman, deputy director and senior associate for South Asia at Wilson Centre in Washington DC told “Asia Squawk Box.”

Still, Khan’s electoral gambit may pay off because it’s pegged to “a strong and loyal base,” Professor Iqbal Singh Sevea said.

“Over the past few days, Khan has been mobilising this base through mass rallies and public speeches with a view towards the next election. His message of fighting corruption and political dynasties, together with his appeal to religious symbolism, has won him support,” the professor said.

Khan’s party emerged as the big winner in mayoral and local body elections in Khyber Pakhtunkhwa last week, it was pointed out.

“Having said that, inflation and the price of utilities have led to disillusionment amongst sections that voted for him,” Prof Iqbal noted.