‘Establishment did not ask me to take a way out’, says PM Imran Khan 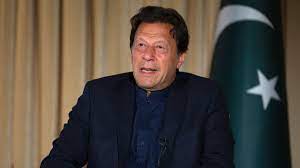 ISLAMABAD: Prime Minister Imran Khan said Saturday that the establishment did not ask him to take a way out as the National Assembly is all set to vote on the no-confidence motion against the premier.

The premier made the revelation during an interview with a private television channel, but just a day before, the premier had said the “establishment” gave him three options — no-confidence motion, resignation from his post, or fresh elections.

PM Imran Khan had said that he would “not resign from office despite losing the majority in the National Assembly.”

In a separate interview with a select group of foreign journalists at his office, PM Imran Khan suggested that he might not accept a vote to oust him, a move he alleged was being orchestrated by the United States.

Opposition parties say PM Imran Khan has failed to revive an economy battered by the coronavirus pandemic or fulfil promises to make his government more transparent and accountable, and have put forward a no-confidence motion due to be voted on Sunday.

“How can I accept the result when the entire process is discredited?” he told the journalists. “Democracy functions on moral authority – what moral authority is left after this connivance?”

“The move to oust me is blatant interference in domestic politics by the United States,” he said, terming it an attempt at “regime change”.

The prime minister, who has already lost his parliamentary majority after allies quit his coalition government and joined the opposition, urged his supporters to take to the streets on Sunday ahead of the vote.

US President Joe Biden has not called PM Imran Khan since taking office, but the White House has denied that it is seeking to topple him.