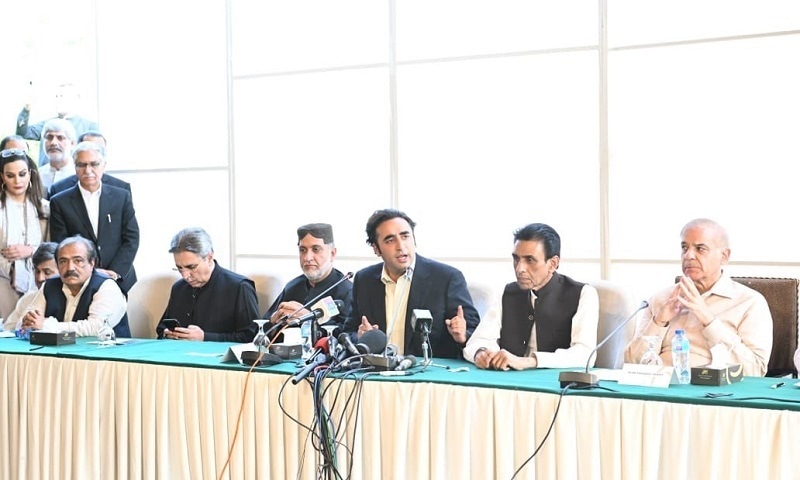 KARACHI: Two ministers from the Muttahida Qaumi Movement-Pakistan (MQM-P) will resign from the Sindh government in the next few days.

MQM-P Convener Khalid Maqbool Siddiqui announced to support joint opposition for voting on a no-confidence motion against the prime minister in the National Assembly.

An 18-point agreement signed between the Muttahida Qaumi Movement-Pakistan (MQM-P) and the Pakistan People’s Party (PPP) has been named the “Charter of Rights.”

However, the agreement has been signed by Pakistan People’s Party (PPP) Chairman Bilawal Bhutto Zardari and MQM-P’s Khalid Maqbool Siddiqui, while Shehbaz Sharif, Fazlur Rehman, Akhtar Mengal and Khalid Magsi have signed the agreement as guaranteer.

According to the copy of the agreement, the PPP and the MQM-P have agreed on the following points.

The Hon’ble Supreme Court’s decision regarding LB in Sindh will be implemented in letter and spirit within one month.

The positions in the job shall be historically assessed and deficiency if any of those hailing from urban/rural Sindh shall be removed by enhancing the quota for them up to 40pc.

Issue of fake domiciles shall be jointly addressed by constituting a commission with mutual consultation.

MQM-P and PPP have agreed that a quota observance joint committee, comprising legislators with an equal representation shall be constituted to monitor the observance of job quota.

In the recruitment of officials from BS-1 to BS-15, the principle of local representation provided in the rules should be strictly followed