Once-starving lions roar back to life in Sudan sanctuary 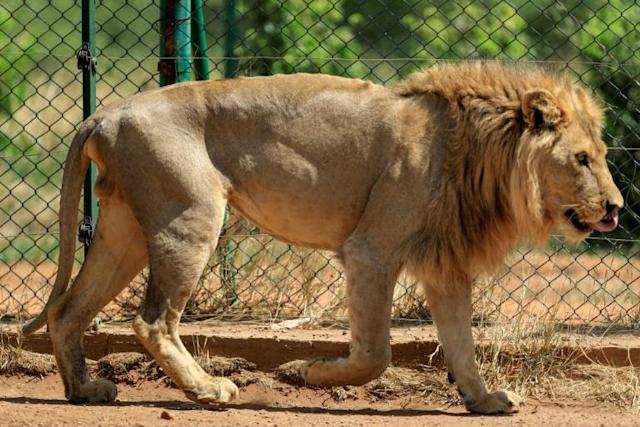 AlBageir, Sudan: Kandaka the lioness was once sick and emaciated in a rundown zoo in Sudan’s capital, but thanks to wildlife enthusiasts she now thrives in a reserve watching her cubs grow.

She was among five lions suffering from starvation and disease with visibly protruding ribs and flaccid skin, held in grim cages with rusty bars in Khartoum’s Al-Qurashi zoo.

Conditions worsened as Sudan’s economic crisis deepened in the wake of months-long protests in 2019 that led to the toppling of former dictator Omar al-Bashir.

Of the five lions in the ramshackle zoo, two died.

The animals’ plight shot to public attention two years ago after an online campaign prompted veterinarians, conservationists and animal enthusiasts the world over to rush to their aid.

Along with the two other surviving lions, Kandaka was moved to the Al-Bageir reserve.

“Their health has since improved greatly,” said Othman Salih, who founded the reserve in January 2021.

The site, an hour’s drive south of Khartoum, spreads over some four hectares (10 acres), or about the size of six football pitches.

As a testament to her recovery, the five-year-old lioness was called Kandaka — the name of Sudan’s ancient Nubian queens.

It is a term that has come to be associated with the women who played a vital role in the protests that unseated Bashir.

She is now thriving in Al-Bageir, one of 17 lions from across Sudan.

But keeping the reserve up and running comes with its own set of steep challenges.

Volunteers, often juggling full-time jobs with their passion for animal welfare, have been struggling with long commutes, soaring prices and limited resources.

“The prices are very high,” said Salih, who travels to the reserve all the way from Khartoum every day.

The reserve’s running costs remain high, including providing more than 100 kilograms (220 pounds) of meat for the big cats daily.

It has so far been kept afloat by donations and tours for schoolchildren and families.

But Sudan, one of the world’s poorest countries, has been reeling from a plunging economy due to decades of international isolation and mismanagement under Bashir.

Almost one third of Sudan’s 45 million people are estimated to be in need of humanitarian assistance in 2022, according to the United Nations.

“Lots of Sudanese people are hungry,” said Salih. “So all aid is funnelled to the people. It’s only natural.”

But Salih says the government and private businesses have done little to support the reserve.

“We try to get by by charging for entry tickets,” he added, with entrance costing between $2-4.

“But it is still not enough, and we often pay from our own money to cover the cost.”

But the reserve remains a source of hope for many.

“I still go there every day,” said volunteer Moataz Kamal, who lives in the capital’s twin city of Omdurman. “It’s like the world outside doesn’t exist when I am here.”

He pointed in particular to the survival of a male lion from the eastern city of Port Sudan, after battling years of starvation and severely poor health.

The lion was named Mansour, which translates to the “victor”, for overcoming such conditions.

It is not known how many lions survive in the wild in Sudan.

A population lives in Dinder National Park, a UNESCO biosphere reserve, on the border with Ethiopia.

African lions are classified as a “vulnerable” species by the International Union for Conservation of Nature.

But Salih still hopes that his reserve will push through hardship and rescue more animals, and remind Sudanese of the wildlife that has been lost from the country.

“Perhaps one day, we will be able to have elephants, giraffes and zebras that have disappeared from Sudan,” said Salih.