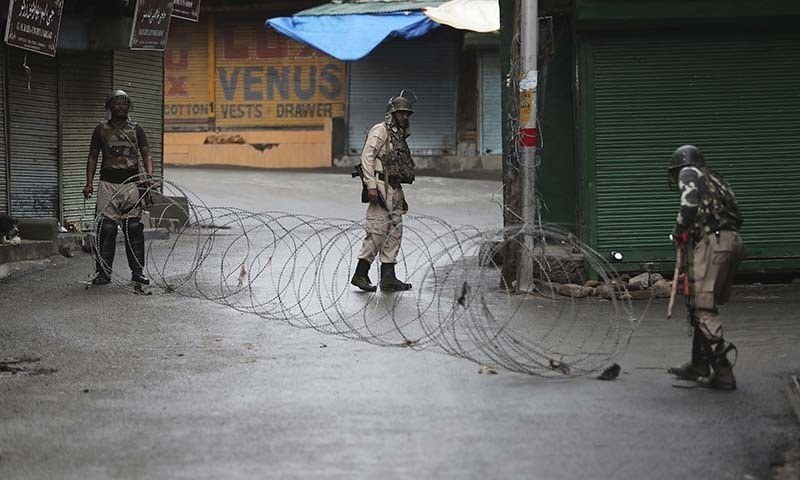 GENEVA: United Nations human rights expert has accused the Indian government of tacitly allowing incitement to violence against Muslims in a report that documents the state-driven and tolerated hatred, discrimination, and violence against minorities in India.

The UN Special Rapporteur on Freedom of Religion or Belief, Ahmad Shaheed, who presented the report to the Geneva-based UN Human Rights Council on Thursday, also denounced the wide-ranging Indian atrocities in occupied Jammu and Kashmir.

Stung by the damning report on ‘rights of religious or belief minorities in situations of insecurity and conflict’, India rejected the UN expert’s findings, without offering any substantive arguments.

On his part, Pakistan’s Permanent Representative to the UN Offices in Geneva, Ambassador Khalil Hashmi, echoed the report’s references about human rights situation in Indian Occupied Kashmir and called on the UN expert to continue monitoring and reporting on the situation, especially the Kashmiri people’s inalienable right to self-determination.

In his report, Special Rapporteur Shaheed said that the Indian authorities had failed to address impunity for human rights violations in Kashmir – including extra-judicial killings, enforced disappearances, and rape – and have enacted special laws to impede accountability and obstruct victims’ access to remedies.

In fact, he wrote that India had increased restrictions on movements of the predominantly Muslim Kashmiri population, already under strict lockdown since the 2019 revocation of Kashmir’s special autonomous status, and sent more troops.

“These measures, combined with Internet shutdowns, have hampered Kashmiris’ ability to protect themselves from the virus or receive outside help,” the special rapporteur said.

The UN report went on to say that Indian armed forces in Kashmir have arrested local politicians, by invoking the Public Safety Act that permits them to imprison someone for up to two years without a charge or trial, following the forces’ dispatch to quell protests and unrest sparked by the Government’s introduction of controversial amendments to the Indian Constitution.

(Under those amendments, India annexed the disputed state of Jammu and Kashmir in violation of UN Security Council resolutions and international law.)

In India, the report said that the spread of derogatory slurs against Christians and Muslims, such as “rice bag converts” and conspiracy theories that Muslim men marry Hindu women to convert them (“love jihad”), foster an environment where discrimination is not just tolerated but sanctioned by political leaders.

“Various authorities in the country have adopted anti-conversion bills that target Christians and Muslims in recent years.

“Online activities can also inflict intersectional harm, such as websites in India that promote mock ‘auctions’ of Muslim women, especially those who are politically outspoken, as a means to compel their withdrawal from public life,” it added.

According to the report, interlocutors report that the Indian government has tacitly allowed incitement to violence against Muslims, failing to condemn a December 2021 video of Hindu religious leaders calling for a Muslim genocide until India’s Supreme Court took up judicial notice.

(Prime Minister Narendra Modi and his close associates have not condemned those statements, including one by monk Yati Narsinghanand Giri, that encouraged Hindus to carry out

“In Sri Lanka, India, and Myanmar, State and non-state actors have accused Muslim minorities of importing the virus or increasing infection rates, sometimes with deadly consequences,” the report added. “Social media has proven a dangerous tool for spreading these conspiracy theories, with the “corona jihad” hashtag (#coronajihad) going viral on Twitter in India after the Government announced high infection rates in the Muslim population.”

The Indian state of Karnataka, according to the report, is attempting to single out Christian organizations, including hospitals and schools, for a census survey, amidst rising regional hostility against that minority group.

In his comments on the report, Indian delegate Pawankumar Badhe said, “We reject the Report of the Special Rapporteur on freedom of religion or belief, which is full of unfounded, unjustified, irresponsible and presumptuous allegations against my country based on unverified information and far-fetched conclusions,”

Taking note of the report’s findings, the Pakistan ambassador said many of the findings were relevant to the grim human rights conditions in UN-recognized situations of foreign occupation.

“Even as people living in these situations do not meet the legal threshold of minority, occupation regimes have often instrumentalized religion to perpetuate and justify atrocity crimes against them,” Ambassador Hashmi said.

“In doing so,” the Pakistani ambassador added, “they invariably aim to eliminate the distinct identity of these people, pursuing legitimate freedom struggle.

“As chronicled by the Report, this dangerous trend alarmingly resonates with the post-05th August situation in occupied Jammu & Kashmir.

“Under the so-called “Final Solution”, the occupying Power is illegally colonizing the internationally recognized disputed territory, transforming the indigenous Kashmiri into a minority, and disenfranchising them of their distinct religious, cultural, and linguistic rights and identity.

“From arbitrary restrictions on religious gatherings to curbs on burial rights; from illegal detentions of Kashmiri leaders and activists to changes in the status of languages associated with Kashmiris; and from illegal land garbs to plans for building Hindu temples in place of mosques, the “Hindutvatization” of the occupied territory remains unabated.”