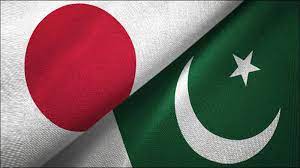 Pakistan and Japan on Thursday agreed to further enhance bilateral trade, particularly trade in agriculture products, besides enhancing mutual cooperation to benefit from expertise and knowledge for the welfare of the people of both countries.

The consensus in this regard was developed in a meeting between the Ambassador of Japan to Pakistan Mitsuhiro Wada, who called on the Federal Minister of National Food Security Syed Fakhar Imam.

Speaking on the occasion Fakhar Imam said that the two countries could immensely benefit from the exchange in agriculture research and value-added technologies.

He praised the quality of mechanization in Japan and said that Japan and Pakistan had huge trade potential, adding that Pakistan had immense export potential with respect to citrus fruits, rice, mangoes, onion, potatoes, fisheries and livestock.

Pakistan had 8 million tons of rice, which could be exported to Japan, he said adding that the value-added industry needed to be set up to fully take advantage of its agricultural products.

The minister said that Pakistan faced a number of challenges but with the right policy interventions under the leadership of Prime Minister Imran Khan, the agriculture sector was transformed.

He said that Pakistani agriculture had been tottering along with the traditional agricultural techniques and it was time that we started to look ahead to the future in terms of modernization.

Imam also highlighted the current government’s efforts and said that in the last 70 years the main setback to research was insufficient funds, adding that this was the first time in the history of Pakistan that under the Prime Minister Initiative Program billions of rupees had been invested in agricultural research which had led to record production of wheat, maize and rice last year.

Speaking on the occasion Mitsuhiro Wada, Ambassador of Japan to Pakistan told the minister that Pakistani agricultural products had huge potential if they were converted into value-added products through processing.

He said that Pakistan was one of the biggest exporters of shrimp, mangoes, dates and rice to Japan.

The Ambassador of Japan to Pakistan said that Japan was greatly interested in increasing trade between the two countries.

The two sides agreed to further enhance cooperation and collaboration between the Ministry of National Food Security and Research and its Japanese counterpart.