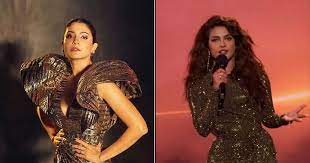 The PK star took to Instagram to share a clip from the Netflix special on her Stories, in which the Bollywood Desi Girl makes fun of her husband Nick Jonas.

The roast which has been creating a buzz on the internet since November 23, also managed to get a thumbs up from Sharma.

“How good are you in this @priyankachopra !!” wrote the Sultan actor as she added a pink heart emoji.

For those unversed, the comedy special instalment featured Jonas family roasting each other in which Chopra dropped the mic, saying, “I’m honoured and so thrilled actually and tickled to be here tonight to roast my husband, Nick Jonas, and his brothers whose names I can never remember.”

“I’m from India a country rich in culture, music and entertainment. So clearly, the Jonas brothers didn’t make it over there,” said the Quantico star.

The 39-year-old actor further said, “Nick and I have a 10-year age gap. Yes, we do. There are many 90s pop culture references he doesn’t understand and I have to explain them to him.”

“That’s good since we’re all learning from each other.” We also teach other subjects. For example, he showed me how to utilise Tik Tok. She said, “You know, and I showed him what a successful acting career looked like.”