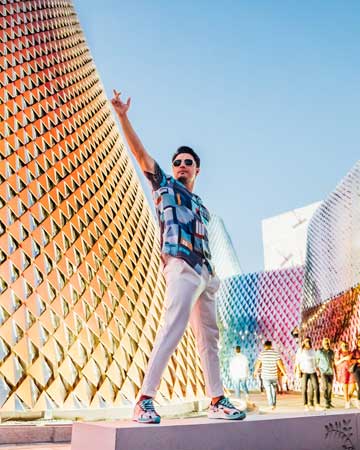 In 2003, a 16-year-old Ali Zafar was painting portraits at a hotel lobby before he shot to fame with his debut single Channo that sold record breaking 5 million copies overnight. Cut to 2021 we have seen Ali Zafar rise and rise through thick and thin making himself a household name not just in his home country but in all of South Asia and the Middle East. He became the first Pakistani to be cast in seven Bollywood movies as a hero opposite mainstream actors in big productions houses and ended up producing Pakistan’s most expensive feature film until date that broke records for being the highest grosser of all times on a non Eid holiday. He paved the way for other Pakistani artists to venture into Bollywood. But that’s not all. Apart from being an actor and a singer who gave hits after hits, Zafar arguable may just the most versatile artist in the region or globally. Ali Zafar is a skilled painter, poet, actor, composer, performer, songwriter, singer, and screenwriter, as well as a music and film producer.

His versatility as a singer and performer can be seen in his caste renditions from Rockstar to Balaghal Ulabikamailhi, from Jugnuon se Bhar Le Aanchal to Rangeen and from Vo Dekhne Main Kesi to Allay and Allah hu.

His unparalleled power as a national icon was visible when many young Pakistanis including expat and immigrant Pakistanis sent thousands of video of themselves participating in his dancing competition. A few months later thousands of rappers send their rap songs for a rapping competition held by Zafar for budding artists. Zafar has also been promoting new talent with his record label Lightingale Records with the promise to give them the opportunity and platform to showcase their talents. His latest single Larsha Pekhawarta again broke records of being the number one trending video in Pakistan for almost a month and for weeks in the GCC.

Ali Zafar has not only proven himself as an actor and singer par excellence, he has also contributed to society with his philanthropy and helping young women pursue education in Pakistan. He has also worked to help those in drought effected areas in Pakistan and his charity organization Ali Zafar Foundation continues to work with various issues and causes in Pakistan.

Ali Zafar was awarded the Pride of Performance, one of the highest civilian honours in Pakistan, last year for his contribution to arts in the country.

As the face of many brands in Pakistan, his hits in Coke Studio and his jaw-dropping performances in Pakistan Super League also won him accolades and praise from critics and fans alike. The UAE government has honoured Ali Zafar with the Golden Visa for his immense achievements across the board and Ali is the first artist from Pakistan to receive this honour. When we inquired how he felt about the honour, he responded,

“I feel truly honoured and humbled by this great gesture particularly because I see Dubai as an example of how people from different cultures, faiths and nationality can co-exist in such harmony with possibilities of a life that are only exclusive to a place like UAE. The way it has developed in such a short time under the leadership of His Highness Sheikh Mohamed is something that has a lot of lessons for the world and for humanity.”