Prime Minister Imran Khan stated on Monday that Pakistan’s future belonged to Gwadar emerging as the ‘focal point of development’ and ensuring prosperity for the entire country.

The prime minister said Gwadar will open up new channels for regional trade while speaking at the inauguration of development projects and the signing of Memorandums of Understanding here in the port city.

The prime minister, who was in Gwadar for a day, inaugurated the first phase of the Gwadar Free Zone, as well as breaking ground on the second phase, which spans 2,200 acres and the inauguration of three industries.

The prime minister described his vision of an emerging Pakistan as a strong nation dedicated to the country’s development.

PM Imran Khan will witness the signing of MOUs of implementation agreement of desalination plant and solar generators grant from South China to South Balochistan during his one day visit to Gwadar.#GwadarRisingWithCPEC#GwadarMakingProgress pic.twitter.com/6X4n1qLZjh

To stimulate industrialisation, he said the government was focusing on guaranteeing the supply of basic facilities in Gwadar and Balochistan, notably clean water and power.

He described the federal government’s recent announcement of a Rs 730 billion development budget for Balochistan as historic, as it intended to raise the province and alleviate the region’s long-standing hardship.

“No country can progress unless it mainstreams all its areas and ensures development across the board,” he said, adding that connectivity was one of the major components of the Balochistan package.

Imran Khan stated that the government was targeting development in rural Punjab, northern areas and far-flung regions of Balochistan.

Gwadar International Airport, according to the prime minister, would increase regional trade and economic activities.

He stated that a one-stop shop effort was underway to assist investors, and he encouraged provincial governments to assure appropriate service of investors because the topic had shifted to them following the ratification of the 18th Amendment.

Imran Khan expressed gratitude to the Chinese government for initiating water and solar projects in Balochistan, notably in Gwadar.

“Pakistan can benefit from its strategic location and also from the expertise of its friend China, which is becoming an economic power in the region,” he said.

He also mentioned the technical education provided by China to the youth of Gwadar, which he said, would prove greatly helpful as the foreign investment grew in future.

A university, employment under the Kamyab Jawan Program, and upgrading the equipment of local fishermen to guarantee value addition of their harvest were among the efforts listed by the prime minister for the uplifting of Gwadar.

On a monthly basis, he added, the Prime Minister’s Office will monitor the progress of the Gwadar development plans.

Regional nations have indicated interest in reaping the benefits of the Gwadar port, according to the prime minister.

In this scenario, he voiced worry about the deteriorating law and situation in Afghanistan, emphasising the need for peace and stability for further growth.

Chief Minister Balochistan Jam Kamal Khan said the provincial government had been collaborating with the CPEC Authority to resolve the issues of customs. He drew attention to the problem regarding the relocation of locals along the Eastbay and mentioned that efforts were on for an amicable solution.

He said the Public Sector Development Programme for the current fiscal year covered the entire Balochistan and mentioned that the extension of Gwadar Hospital up to 200 beds, construction of the first university in Gwadar, border markets and uplift of villages were on the cards.

Chinese Ambassador Nong Rong said the cooperation between the governments of Pakistan and China had led several projects to see the light of the day. He said over the past eight years, the two countries accelerated their pace on several projects related to civic amenities, particularly clean water and solar plants.

He said Gwadar was a showcase of the “Chinese solution” for Pakistan’s development.

By taking a comprehensive way of development, he said, Gwadar Port would turn into a business hub. He said China would continue to extend support for a shared future with Pakistan.

He said now, the groundbreaking of the second phase at the vast 2200 acres starting today , would usher in a new era of prosperity in Gwadar and in Balochistan.

He mentioned that the personal interest of Prime Minister Imran Khan resulted in materialization of trans-shipment policy, Afghan transit policy, the framework signing and execution of border trade with Iran and start of work at Eastbay Expressway.

He said several significant development projects were in progress including the Gwadar International Airport and a Vocational Institute to develop skills of the locals.

Bajwa said conspiracies were on the rise against CPEC, however the commitment of the government greatly helped thwart such challenges.

Earlier, the prime minister before landing at the Gwadar Airport took an aerial view of the infrastructure built at the seaport including the Expressway.

On his arrival at the China Business Centre Hall, he was given a detailed briefing of the South Balochistan Development Package. He also held an interaction with the CPEC Workforce.

With their respective ambassadors present at a ceremony attended by Prime Minister Imran Khan, the regional countries showed their support for the development of Pakistan’s port city.

Prime Minister Imran Khan on the occasion also witnessed the signing of two Memoranda of Understanding with the government of China for carrying out development projects in Gwadar. 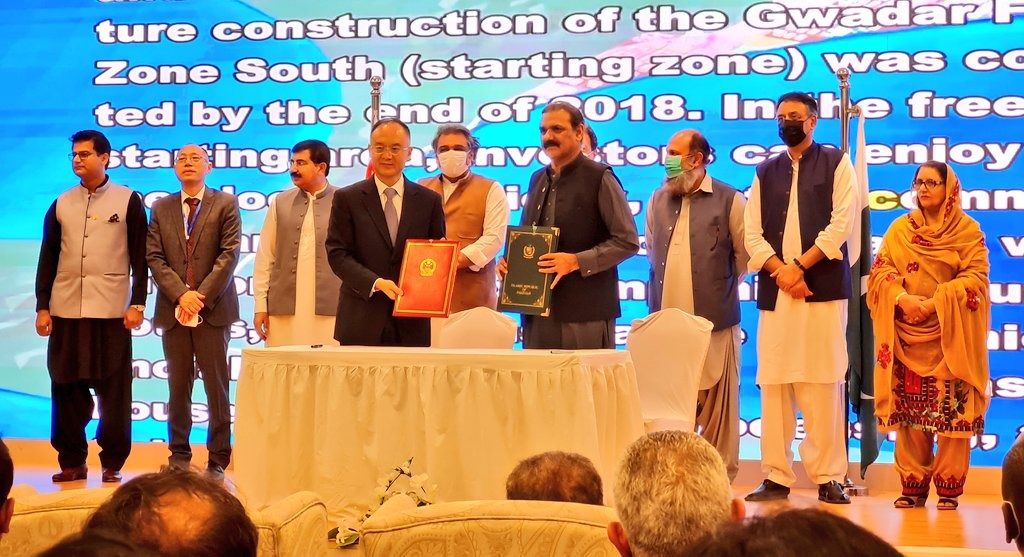 The accords included the implementation agreement on setting up of 1.2 MGD desalination plant to resolve the shortage of drinking water for the residents of Gwadar.

Other agreements included China’s grant for solar generators for South Balochistan, and the groundbreaking of North Gwadar Free Zone and Enterprises.

Prime Minister Imran Khan, regretting past rulers’ persistent negligence towards Balochistan province, on Monday assured that the federal government would enhance its contribution for the development of the province every year.

Addressing a gathering of elders, the prime minister decried that the past rulers had prioritized their political objectives, always treating the development and progress of the backward Balochistan province as their backburner.

“They did not pay attention to Balochistan province and focused solely on becoming prime minister of the country. They preferred to live in London and spend time during the summer season,” he said in apparent reference to former prime minister Nawaz Sharif.

The prime minister said Nawaz Sharif had 24 visits to the United Kingdom, out of which 23 were private trips. He did not bother to come to Balochistan whereas Asif Zardari had been to Dubai 51 times.

The prime minister further said that the one who thought of Pakistan, would always focus on its backward areas and Balochistan province.

On the contrary, the previous ruling elite focused on winning elections and preferred to contest from Faisalabad with multiple constituencies, instead coming to Balochistan, he said. Due to their personal objectives, different areas like the merged tribal areas and Balochistan lagged in terms of progress and prosperity, he added.

“It was our great misfortune. If they had paid attention to the whole country, they might have continued as rulers of the country,” he observed.

The prime minister said the country could achieve progress when there was simultaneous and uniform progress, across the board. The residents of Balochistan province had a sense of deprivation due to continuous neglect, he added.

Moreover, neither the Center nor the political leadership of the province, in the past, paid due attention to the plight of people, leading to widespread sense of deprivation, he said.

The incumbent federal government, the prime minister said, had announced the biggest uplift package for the province because injustice had been done to the people of Balochistan in the past, adding its contribution towards Balochistan province would be increased in their financial resources.

He said that the government was focusing on Gwadar uplift with a string of development projects, including setting up of a desalination plant and construction of a 300-bed teaching hospital.

To fully protect the fishermen and improve their conditions, Rs10 billion was allocated under Kamyab Nauwjawan programme and out of which so far, Rs 5 billion had been spent.

About the construction of low-cost housing units, the prime minister said, the government had received a total of 4,000 applications from the area and had identified 200 acres of land over which initially 2,500 houses would be constructed.

The prime minister further said that Ehsaas scholarships would be given to 4,698 young people of the province.

Additionally, the federal government was committed to provide 3G and 4G Internet connectivity throughout the province which would create huge job opportunities for all, especially the womenfolk.

He said the China Pakistan Economic Corridor (CPEC) would bring the biggest benefits to the people of Balochistan and inhabitants of Gwadar.

The prime minister said there was a complete ban on illegal fishing through big trawlers.