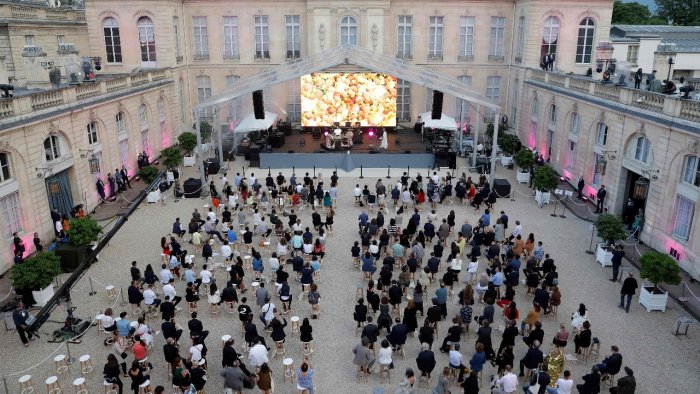 France celebrates music in all its forms with a giant street party on June 21.

In 2018, Macron began throwing open the cobbled courtyard of the Elysée Palace to dance fans on that day, with a gig featuring stars from France’s electro scene.

This year’s Fete de la Musique comes a day after the government scrapped an 11:00 pm curfew, one of the last steps in a phased lifting of Covid restrictions.

Last year’s festivities went ahead but were muted because of the coronavirus pandemic.

Now, with the number of infections at their lowest level in nearly a year the country is in party mode once more.

While bad weather put a dampener on events in some cities, more hardy souls were undeterred.

“Seeing people, their smiles, it feels good,” said Laure, 40, who had taken her two nine-year-old children to a show despite the drizzling rain in the northwestern port city of Brest.

“We heard there were mini-concerts and we went out wanting to relax and enjoy ourselves.”

Groups of musicians from classical to rock played at pop-up events across the French capital, adding a new layer of life to the slowly reopening Parisian social scene.

Just days after the tennis open, centre court at Roland-Garros played host to around 40 artists, including Patrick Bruel, Vianney and Kendji Girac, performing in front of 4,000 seated and masked spectators.

Macron conferred Legion of Honour decorations on both musicians.

Jarre dedicated the award to “the whole electronic music family, the DJs… the technicians who have really suffered during the pandemic.”

In contrast to previous editions, where Macron and his wife Brigitte have gamely joined in the dancing, concertgoers had to content themselves with tapping their feet.

Attendees were asked to remain seated and social distancing will be observed.

To mark this year’s festival, the government announced that nightclubs, which have been closed for 15 months, will reopen on July 9.

Clubbers will have to present a new health pass showing they are fully vaccinated against Covid-19, have a clean PCR test or have already had the virus.

Masks will not be obligatory in clubs, which will only be allowed to operate at 75 percent of their capacity, Alain Griset, the minister in charge of small businesses, said.