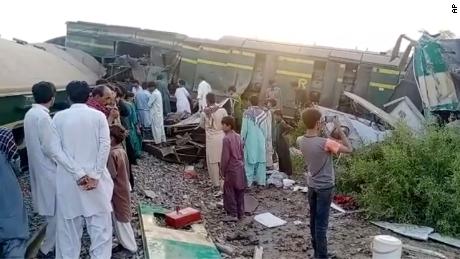 Up to 200 people have died and over 250 injured in the past five years in 15 train-related accidents in Pakistan, according to the data compiled by Daily Times.

The list does not include the Monday crash, the first major crash of the ongoing years where two trains collided in Sindh’s Ghotki, and at least 45 passengers were killed while 64 others are severely injured. The Millat Express derailed and before its bogies could be removed timely or accident alert would have been issued, the Sir Syed Express and the derailed bogies collided head-on the dead of the night. The collision took place between the Raiti and Obaro railway stations.

The record shows one accident occurred at the start of 2020 when a train collided and a passenger bus collided near Rohri in Sindh. Nineteen people were killed in that accident. In 2019, two accidents occurred: in October, 70 people died in an explosion on a moving train near Rahim Yar Khan and the accident was blamed on short-circuit fire; in July, three people were killed when a passenger train collided with a stationary cargo train at Makli Shah, near Hyderabad.

The year 2018 saw the most number of accidents. On December 12, children were injured when a passenger train crashed into a school van near Narowal, Punjab. Eyewitnesses said the accident happened due to dense fog and because the gate at the crossing was left open. In September a Peshawar-bound train derailed in Sehwan, Sindh, due to which 11 bogies overturned. Earlier in the same month, nine bogies of the Peshawar-bound Khushal Khan Khattak Express from Karachi derailed near Attock. 20 passengers were injured. In June twenty-three bogies of a Karachi-bound freight train derailed in Sukkur.

In March 2017, at least two people were killed and 10 injured as Karachi-bound passenger train Shalimar Express collided with an oil tanker, leading to a huge explosion. January saw two accidents one in which a motorcycle-rickshaw had collided with the Hazara Express, resulting in the deaths of eight people, including six schoolchildren and the driver in Lodhran, and another in which Aatrain had hit a car in Gojra, killing six people who were inside the car. The Shalimar Express had collided with the car, which was crossing the railway track at the time of the accident. The gate at the crossing was open at the time, which led to the accident.

The earlier years also have such deadly tales coming from the public railway department. When will a train journey be made a safe event?