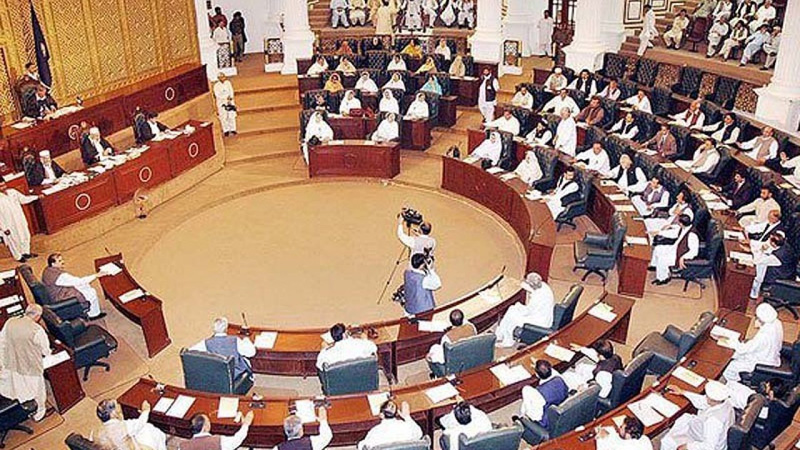 The joint resolution was moved by Special Assistant to Chief Minister Kamran Khan Bangash with Speaker Mushtaq Ahmad Ghani in the chair.

The resolution stated that the Khyber Pakhtunkhwa Assembly condemns in the strongest terms the bombing and killing of innocent Palestinians by the Israeli military in the city of Gaza.

The other resolution was moved by Independent MPA Mir Kalam Wazir to ensure proper treatment of Pashtuns by the law enforcers in Sindh and other parts of the country.

“The recent reports show that 240 Palestinians over 65 children are killed and more than 1,300 Palestinians are also wounded in the recent bombardment by Israeli air raids”,  reads the resolution.

“This is a clear act of terrorism by the Israelis while violating human rights and most importantly violating the UN Security Council resolution.

“In the recent attacks which started 11 days ago during the Holy month of Ramazan, the Refugee camp is bombarded by the Israeli forces, innocent Palestinian children killed in the airstrikes, building targeted and destroyed, people watching helplessly as bodies of the family members were pulled out of the rubble and thousands left homeless and traumatized.

“The humanitarian crisis unleashed by the Israeli aggression affected every Palestinian, and at the same time, it had hurt the feeling of millions of Muslims across the globe.

“The Government of Khyber Pakhtunkhwa and KP Assembly strongly condemns the barbarian act of the Israeli and demands the world leaders to come close together for stopping the brutalities of Israel and stand for the free state of Palestine.

“The other resolution was moved by Inayatullah Khan of Jamaat-e-Islami demanding the federal government to resolve the problem of overseas Pakistanis who face difficulties during traveling at International airports over non-acceptance of Chinese and Russian corona vaccines being administered to them in their home country.”