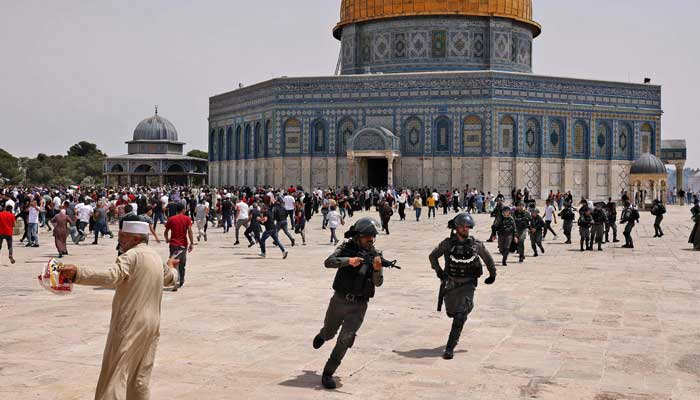 A few hours into a ceasefire agreement reached between the Israeli government and Hamas, which governs the Gaza strip, Israeli police were reported to have stormed the compound of the Al-Aqsa mosque once more on Friday.

Al Jazeera journalist Arwa Ibrahim also reported stun grenades being launched at worshipers, “Back to square one?” she asked.

Citing Red Crescent, she said at least 20 people were injured.

Ibrahim shared footage from the compound, showing worshipers scrambling amid loud explosions in the background.

The worshipers had stayed back after Friday prayers to celebrate the truce.

“They were singing and chanting when a contingent of the Israeli police [stationed] next to the compound came into the compound and started using crowd control measures that they use all the time, including stun grenades, smoke bombs and tear gas,” Al Jazeera’s Imran Khan, who was reporting from occupied East Jerusalem, said.

“They started firing in that crowd in an effort to try and disperse them.”

Israeli strikes on Gaza have killed 232 Palestinians, including 65 children, and have wounded another 1,900, according to the Gaza health ministry.

Vast areas have been reduced to rubble and some 120,000 people have been displaced, according to Hamas authorities.

On the Israeli side, 12 people, including two children, have died.

The truce brokered by Egypt, which also included Gaza’s second-most powerful group, Islamic Jihad, was agreed upon in the early hours of Friday, following mounting international pressure to stem the bloodshed which erupted on May 10.

The violence was triggered after police action at Al-Aqsa mosque during the Ramadan fasting month.