PML-N narrative: are Sharif and Sadiq acting as Trojan horses? 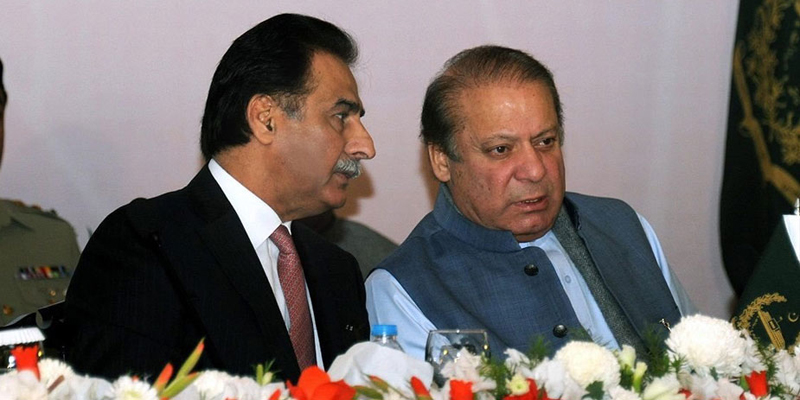 Did Ayaz Sadiq, as a repository of national interest and secrets, cross red lines? Most probably yes. Did his message synch in with the Indo-US narrative on China? Certainly yes!

Did two holders of top positions cross the red lines to exact revenge on an institution that they hold responsible for their plight – an institution remains under the microscopic scrutiny of both India and the US. Will Sharif emerge as the Trojan horse against the GHQ or melt away under his own contradictions as did the once dreaded Altaf Hussein?

Let us see how both have kept their personal interests above those of the state of Pakistan.

Prime Minister Nawaz Sharif lapped up the idea as a “game-changer” for Pakistan and touted it as his brainchild, though the Chinese leaders have repeatedly made it clear that relations between the two countries are independent of governments and personalities. It is about a unique relationship between two sovereign states China and Pakistan.

Pakistan Army underwrote the security of the multi-billion dollar CPEC, instantly raised the special security division (south) because it viewed the grand project as a bailout for Pakistan to the context of international isolation and absence of foreign investment. During General Qamar Bajwa’s Beijing visit in October 2019, President Xi especially thanked the GHQ for the safety measures around Chinese personnel.

But , sadly, several years down the lane, a frustrated Sharif and his cohorts have chosen to attack the same security establishment, holding it responsible for the personal legal and political issues the former prime minister and his family are facing.

In his speeches at Karachi and Quetta, Sharif named the same security establishment top bras which meanwhile is closely consulting and coordinating with their Chinese counterparts on bilateral and regional security matters – as strategic partners. In a way, they are conveying to the Chinese friends not to trust and engage with the Pakistan military which Sharif now insists is behind all problems.

Sardar Ayaz Sadiq, the former speaker of the National Assembly fuelled up Sharif’s narrative by insinuating against the government and the military, saying they were fearful of an Indian strike had Pakistan not released pilot Abhinandan.

This amounted to an unprecedented breach of sanctity of a civil-military in-camera meeting for two reasons; firstly, Shah Mehmood Qureshi never uttered words Ayaz Sadiq attributed to him. Secondly, even if it were true, responsible national politicians don’t spill the beans in the public. As Sadiq took to the floor of the National Assembly on October 28, the 2+2 Indo-US meeting of foreign and defines ministers was spicing up their joint declaration with strong allusions to both China and Pakistan on account of authoritarianism and terrorism.

Both Sharif and Sadiq simply provided the kind of ammunition that the India media keeps scavenging for. Federal Minister Fawad Chaudhry’s vague reference to Pulwama took the sheen off Sharif’s narrative for a bit but the larger emerging picture is scary. A very close, long-time associate of Sharif, told me privately of his anguish over what Sharif and Sadiq had done; breaching their oath and destroying the trust between the military and the civilians. I also am privy to a lot but will never throw it out in the public, he emphasized.

A desperate Sharif has drawn the lines and pulled the dagger on the establishment in the hope of his daughter Maryam getting political space, he said.

Whatever the PML-N top brass has said or is threatening to say, fits into the Indian song on Pakistan. This also defies the large-scale global appreciation that Pakistan earned by instantly releasing the Indian pilot.

And whatever transpires between the US and India is their ode on how to tame China, and by implication also carries implications for Pakistan. The latest proof is their joint statement after the third annual India-US 2+2 ministerial dialogue between Defence minister Rajnath Singh and Minister of External Affairs S Jaishankar with the Secretary of State Michael Pompeo and Secretary of Defence Mark Esper.

Interesting as well as alarming, though not surprising, were Pompeo’s remarks at the post-dialogue press stake-out.

“Our leaders and our citizens see with increasing clarity that the CCP (Chinese Communist Party) is no friend to democracy, rule of law, transparency, freedom of navigation and free and open and prosperous Indo-Pacific…I am glad to say that the US and India are taking steps to strengthen our cooperation against all manner of threats and not just those posed by the Chinese Communist Party,” he added in the typical self-serving and selective American way.

Defence Secretary Esper also took aim at China by saying that “Based on our shared values and common interests, we stand shoulder-to-shoulder in support of a free and open Indo-Pacific for all, particularly in light of increasing aggression and de-stabilising activities by China.”

At the same time, their joint statement also singled out Pakistan by asking it to “take an immediate, sustained and irreversible action to ensure that no territory under its control is used for terrorist attacks, and to expeditiously bring to justice the perpetrators and planners of all such attacks, including 26/11 Mumbai, Uri, and Pathankot.”

The ministers emphasised the need for “concerted action against all terrorist networks, including al-Qaeda, ISIS/Daesh, Lashkar-e-Taiba (LeT), Jaish-e-Mohammad (JeM) and Hizb-ul-Mujahideen (HM) ” a literal copy paste from the Action Plan imposed on Pakistan by the Financial Action Task Force (FATF) since June 2018 (as a result of PML-N’s non-compliance of commitments made to FATF).

Pakistan has a formidable task at hand to firstly, ask the world as to whose proxies are the Tehreek-e-Taliban Pakistan (TTP), Baloch Republication Army , Baloch Liberation Front and ISIS/Daesh. Which country (India) has offered asylum to Baloch separatist leaders? Which Indian officials, including PM Modi and National Security Advisor, keep talking of strengthening the Baloch separatists and those opposed to the military? Why would RSS host Brahamdagh Bugti for four months in India?

Secondly, why is Pakistan’s security apparatus under constant attack from across the border by TTP/Daesh and similar terrorist thugs? Is there any logical explanation for them to this? They certainly can’t hope to overrun the state of Pakistan through these hit-and-run tactics.

Thirdly, Pakistan’s civil-military leadership shall have to take the Chinese friends on board to explain as to what these Pakistani “Trojan Horses” are up to. Sharifs occupy a good place in Chinese hearts but the government will do good to strategically communicate to the Chinese how statements by these leaders have become part of the Indian strategic communication on China and Pakistan.

Pakistan-China friendship is too precious to be left to the whims of these “Trojan Horses” who want to bring down the state because they can’t get back into power.

The writer is Editor, Strategic Affairs, and also heads the independent Centre for Research and Security Studies, Islamabad and author of Pakistan: Pivot of Hizbu Tahrir’s Global Caliphate.