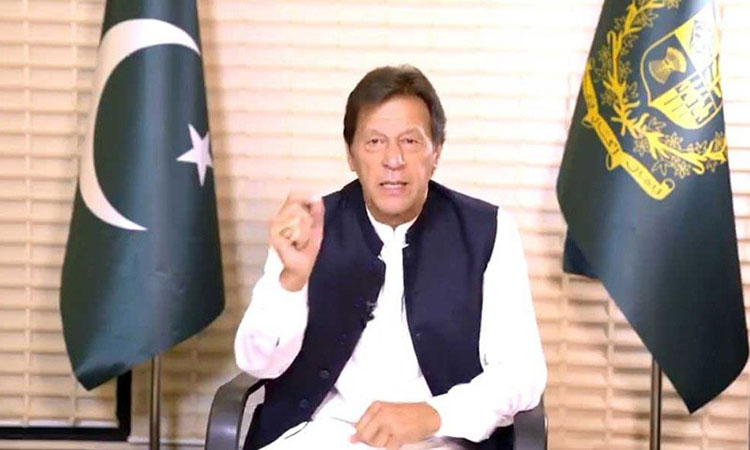 Prime Minister Imran Khan on Thursday said as around one billion people – almost 15 percent of the world’s population – survived in poverty, lacking the income and capabilities to live with dignity, his government was committed to reduce poverty from 24.3 per cent to 19 per cent by 2023.

“My aim is to create an Islamic welfare state based on the principles of Riasat-e-Madina through inclusive equitable growth and economic modernization,” he said while speaking through video-link at a high-level event, “Poverty at a Crossroad: Using Leadership and the Multidimensional Poverty Index to Build Back Better”, held on the sidelines of 75th UN General Assembly Session in New York. The prime minister said over the past 30 years, poverty had visibly declined. “However, the COVID-19 pandemic has triggered the worst global recession in over a century. One hundred million people are likely to be pushed back into extreme poverty. A decade’s development could be reversed,” he added. “The COVID virus does not discriminate; but it is the poor and vulnerable, who have suffered the most from it,” he remarked. The prime minister said in Pakistan, they had been able to control the virus through the strategy of “smart lockdowns”.

“My government has done its utmost to shield the poor and the vulnerable. Despite our financial difficulties, we implemented a $1.25 billion package to deliver emergency cash to over 15 million families, covering over a 100 million people,” he added.

Imran Khan said his government was implementing a multi-sectoral poverty alleviation programme – Ehsaas (which means compassion). It was the largest poverty eradication programme in Pakistan’s history. He said, “Poverty imposes massive human suffering. It is the most pervasive violation of human rights. It is also the root-cause of socio-economic instability, and of most political and security problems across the world.

“It is thus only right that poverty eradication is the first among UN’s Sustainable Development Goals.”

The prime minister said as the UN Secretary-General had observed: “Inequality is the hallmark of our times”.

“Today, the 26 richest people in the world own as much wealth as half the world’s population does. The richer countries have mobilized over $10 trillion to recover from the COVID crisis. The developing countries on the other hand are struggling to find even a small fraction of the $2.5 trillion they need,” he added. Imran Khan said apart from the direct attack on poverty, they needed to address its systemic causes. “At the national and international levels, the structures of finance, production and trade must be made fair and equitable. The exploitation of the resources of the poor countries must stop,” he added.

The prime minister said the illicit flows of the fruits of corruption and crime must be halted and the stolen assets returned to the countries of origin.

And, the developing countries must be helped to recover from the COVID crisis, to realize the Sustainable Development Goals (SDGs) and to ward off the impacts of climate change, he added. The prime minister said, “The financial resources needed by the developing countries must be mobilized, through debt relief – which I called for last April; the creation of new Special Drawing Rights; and expanded official development assistance.”

He said the realization of the SDGs could be accelerated, especially through major investments in sustainable infrastructure – in renewable energy, transport, housing, water and sanitation.

“New technologies must be mobilized and the digital divide bridged to enable developing countries to leapfrog into a modern development paradigm,” he added.