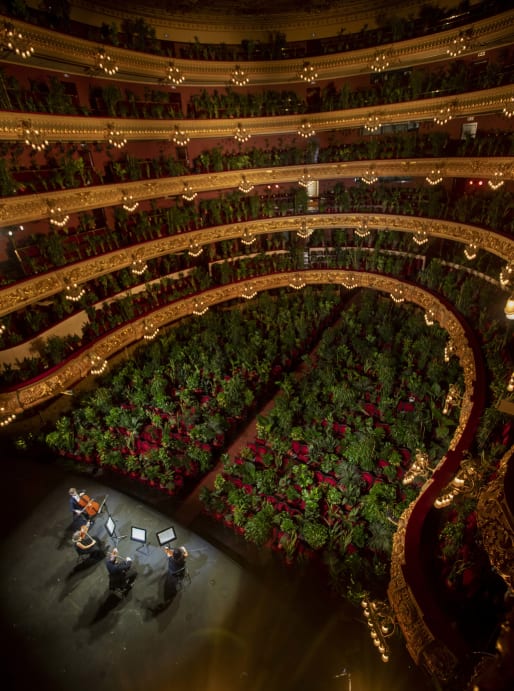 It’s not uncommon for performances at Barcelona’s Gran Teatre del Liceu opera house to be sold out, but musicians played to an unusual audience on Monday to mark Spain’s lifting of lockdown — as thousands of plants filled its seats.
The event was the work of conceptual artist Eugenio Ampudia and included a performance from the UceLi Quartet string quartet.
A total of 2,292 plants were packed into the theater, while the string quartet performed Puccini’s “Crisantemi,” according to a statement from the Liceu.
Although humans were not present in the audience, spectators could watch the “Concierto para el bioceno” via livestream.
The famed opera house said in the statement that it “welcomes and leads a highly symbolic act that defends the value of art, music and nature as a letter of introduction to our return to activity.”
The plants were brought in from nearby nurseries and each one will be donated to a healthcare worker from the Hospital Clinic of Barcelona.
The opera house added in the statement that, following this “strange, painful period,” organizers wanted to “offer us a different perspective for our return to activity, a perspective that brings us closer to something as essential as our relationship with nature.”
Spain’s coronavirus state of emergency forced the Liceu to suspend its program of events in mid-March.
The country has so far recorded 246,504 coronavirus cases and 28,324 deaths, according to figures from Johns Hopkins University.
The country’s state of emergency ended on Sunday and cultural venues can now reopen with a limited number of spectators.
Around the world, performers are contending with restrictions imposed during the coronavirus pandemic.
Some have tried streaming online, others have played at drive-in movie theaters, and a few have even booked to play in empty stadiums.
And it looks like the situation could last a while as some, including Los Angeles Mayor Eric Garcetti, say large gatherings like sporting events or concerts may not resume before 2021.