Not only Punjabi, but all regional language dramas have faced a downfall: Khalid Butt

* 'I used to live in Multan where neither TV nor radio was available,' he says 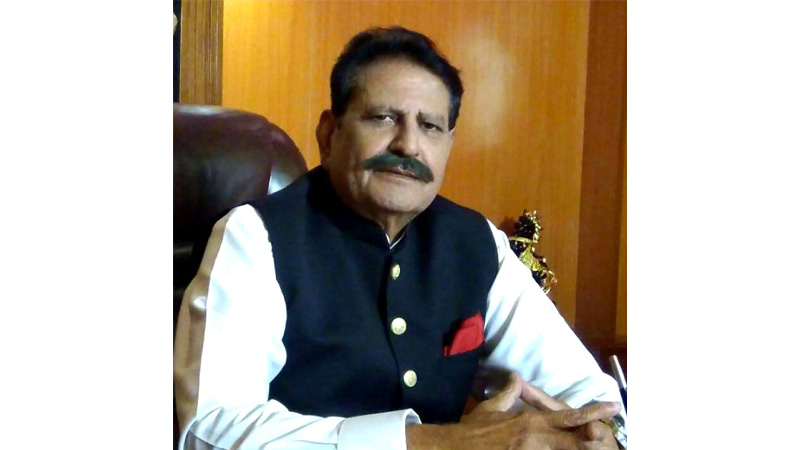 Khalid Butt is one of those actors of the Pakistani showbiz industry who have worked hard to give it its name. It won’t be wrong to place him in the list of those veterans whose presence marked the golden era of Pakistan Television. He has worked in countless serials, both Urdu and Punjabi and both classical and modern, such as “Janjaal Pura”, “Sooraj Ke Saath Saath”, “Hamaam”, “Boota from Toba Tek Singh”, “Landa Bazaar”, Love, Life aur Lahore”, “Kuch Pyar Ka Pagalpan Bhi Tha”, “Qismat” and “GT Road”. Daily Times caught up with the senior actor and asked him a few questions, to which he gave bold and courageous answers.

How did you enter the showbiz industry?

I used to live in Multan where neither TV nor radio was available. We would get to know about celebrities through magazines, and since they were larger than life personalities, people would aspire to be like them. I also wanted to be a film actor and therefore came to Lahore in 1970. However, seeing the masculine and charming Waheed Murad and Muhammad Ali, I realized that I would never be a hero figure, for it demands an altogether different physical appearance. For five months, I searched for roles but all in vain. The desire for acting was pushed into the background and I became an associate director for films instead. For almost ten years, I did this job and also got an opportunity to do a scene here and there and act in a few commercials. Around 1978, the finances of the film industry dropped and I grew weary of having to beg for my salary. It was then that I approached TV personalities whom I had gotten in touch with owing to my work in the showbiz industry. The TV actors were better off when it came to salaries and used to get them on time without having to run after people. I therefore met Arif Waqar who gave me one line which I was supposed to read in five different ways. I did so and got accepted for his serial. I played the role of a hero in my very first serial and people everywhere started to recognize me. Since there was only one channel and everyone used to watch it, I became popular among all the people in my residential area as well.

You have also done theatre. Tell us something about that.

After a year of entry into TV dramas, I was called by Khayam Sarhadi for a theatre play. From then onwards, my journey as a theatre actor also began. I also produced a few theatrical dramas but stopped doing so when vulgarity jumped in in the form of inappropriate dances.

Which project of yours do you think was your breakthrough or gave you an identity?

To be very honest, scandals pave your way towards breakthroughs. In most of the cases, the producers are offered vine and women in exchange for important roles. I never did this, neither did I take up menial jobs to please the producers. I used to go for small length, insignificant roles as well, because what mattered to me were dignity and my house’s humble rent instead of a luxurious life. I also believe that an actor should not never associate himself or herself with one single character. That is not how an actor works. A true actor takes up variety roles and never clings to one character. Different identities mark a real actor, or an actor for that matter. Either one is an actor, or one isn’t. However, if you were to ask me about my memorable serials, they are “Sooraj Ke Saath Saath” and “Chaanan Tey Dariya”. “Chaanan Tey Dariya” was a Punjabi serial written by Mustansar Hussain Tarar.

What do you think is the reason for Punjabi dramas’ downfall?

Well, not only Punjabi, but all dramas in regional languages have faced a downfall. This is because people who are responsible for promoting our culture aren’t taking the responsibility seriously. What matters for them is their salary. Every government that comes takes hold of PTV and starts eating it up instead of airing quality entertainment on the channel. Moreover, only those people are allowed to take jobs at PTV who are off-springs of the already existing government officials over there. Another Punjabi channel by the name of APNA was introduced, but it too became the victim of greed and wealth-lust. The scripts started getting sold at cheaper prices day by day and consequently, the crew being taken in also became mediocre. The channel shut down ultimately.

In such a rich career spanning over more than five decades, why didn’t you ever go for direction?

I did. I have three films to my credit, “Ramzana”, “Pyaas” and “Chori Chori”. However, I got nothing out of them. One of my films got released the day Zulfiqar Ali Bhutto was hanged. The whole country was in a chaos and no one went to watch the film.

After a year of entry into TV dramas, I was called by Khayam Sarhadi for a theatre play. From then onwards, my journey as a theatre actor also began. I also produced a few theatrical dramas but stopped doing so when vulgarity jumped in in the form of inappropriate dance

What do you miss the most from PTV days?

I miss rehearsals. We used to rehearse a lot. These days, I receive a call at night and am asked to be on the set next morning. I also miss good scripts. The scripts being directed these days are giving rise to a morally corrupt culture. We make heroes and heroines out of men and women who are having extra-marital affairs. Such disloyal characters are glamorously portrayed in our dramas and their posters. This is an abominable trend, or maybe it has grown fashionable because we never raised voice on Heer and Ranjha meeting each other in the dark of the night. Instead, we made a villain of Kaido, who was actually trying to stop the misdeed from growing. So, it can be said that affairs are rooted in our very culture, which is growing stronger day by day along the same lines.

None! And let me tell you, all those people who tell you about their upcoming projects lie. In these days, one never knows if a project that has been completed will even go on air or not. We are living in such uncertain and strange times. You never know what’s in store for you or which project is going to be your next. When Shashi Kapoor died, his diary revealed eighty movies booked in advance, and not a single one got executed. That’s how life is. So, I can never say what fate holds for me until it is done and sent on screen.

Is there any message which you would like to send across?

Discussions between writers and directors should start taking place gain. Creative minds should consult each other and then start working on a project. Nowadays, channels buy scripts and hand them over to the director, who does not have a lot of margin to add his or her own creativity. A few directors who work very hard are not given top channels to exhibit their work. One of my serials “Ghughi” was a huge project, based on Amrita Pritam’s Partition novel, “Pinjar”, but it was aired on TV One which hardly anyone watches. This is how hard works are being wasted.

Although Khalid Butt is confident about the honesty with which he has worked in the Pakistani showbiz industry, he isn’t happy with how it works. “It’s a very thankless profession. You get nothing out of it unless you beg for work. A few projects that I am still doing today are because of my sincerity which I put into my work, as a result of which even those producers and directors take me in who otherwise dislike me. By the end of the day, the only assets I believe I have are my children,” he says.