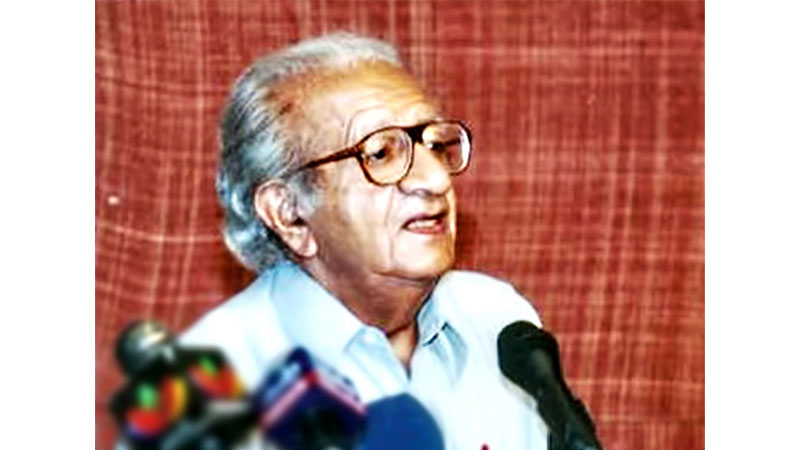 I have met Shafqat Tanvir Mirza many times in my lifetime, may be at PTV Station or in the daily Dawn’s office in Lahore, the latter he had joined in 1990s. He was polite and hospitable person. He always accommodated my visits to his daily’s office despite that heaps of papers laid on his table awaiting his attention to feed his column or to write a book. At that time I knew him as a Punjabi writer who also wrote in Urdu and English languages. What I did not know was that he was an emphatic proponent of Punjabi language and literature at all forums including his English language columns and that he was a translator also.

Shafqat Tanvir Mirza was also known as STM. He was born on February 06, 1932 in Domeli, District Jhelum, Punjab in the house of Mirza Shukar Ullah and Rehmat Bano. He studied in adjoining cities, Chakwal, Attock and Bahawalnagar but went for graduation in the reputed Gordon College, Rawalpindi. His natural choice was to start his vocation in Rawalpindi where he chose journalism as his field of interest. He joined dailies Tameer and Hilal but soon moved to daily Musawaat in 1970. In this city, his career culminated as the editor of daily Imroze.

STM was a bold writer and used his pen to expose the injustices to Punjabi language by the Punjabis in connivance with non-Punjabis. He believed that Punjabi politicians were illiterate in terms of Punjabi and Saraiki languages and literature. It was not their fault. They never studied in their native languages. It was the system’s fault. They had studied in Urdu and/or English languages. Everybody still does. These politicians have been feudalists, industrialists or professionals. They are not fully aware of the linguistic commonalities of various dialects of Punjabi language which is very rich and old language; language of Baba Farid of Pakpattan, Khwaja Fareed of DG Khan, Peelu of Khushab, Sultan Bahu of Jhang, Hafiz Barkhurdar of Hafizabad, Bulleh Shah of Kasur, Shah Hussain of Lahore, Shah Murad of Chakwal, Mian Muhammad Bukhsh of Mirpur, Nosha Gunjbukhsh of Mandi Bahauddin, Warris Shah of Sheikhupura and Data Gunjbukhsh of Lahore. These people in power behave differently when in power despite being there after getting votes from their masses but are not bothered to support the mother tongue of the masses.

In one of the columns on how the academics failed the language of the people, STM talked about how the Punjabi Department at the University of the Punjab and later Punjab Institute of Language, Art and Culture failed to concentrate on the real cause for which these departments were created. The educators in these departments could not distinguish between the language and the religion. Arabic language, in which the holy Quran was written, was a language of the Arabs much before the advent of Islam. So the Punjabi scholars who were not Muslims were neither included in the curriculum nor in the research work like Baba Guru Nanak, Shah Hussain in Pratan Janamsakhi of 1558, Saraiki poets etc. Their dialects were also ignored. If included it could have given a balanced history of the language from ancient times to the modern day.

The impressions of Saira Dar in her interview with STM in local English daily on December 11, 2011 were that in the context of Pakistan’s predicaments, STM had a clear view of where we have gone wrong. “At the time of Partition, an education emergency should have been declared. The emphasis should have been on cultivating good quality manpower and curbing feudalism.” He emphatically stated, “For any society that wishes to progress, it is essential to develop three forms of manpower; imaginative, creative and productive. Unfortunately these three forms of endeavour have been systematically crushed by vested powers, especially the feudal lords and those with a similar mindset.”

Shafqat Tanvir Mirza, founder of Majlis Shah Hussain and the one who laid the foundation stone of Shah Hussain College died in the Shah Hussain’s city of Lahore on November 20, 2012. He is survived by wife Tamkinat Ara and daughter Tabashra Bano. The latter is married with three children. He was buried in DHA graveyard near his house.

In the general anti-Punjabi language and literature’s dismal scenario, whatever salvage could be done was due to the efforts of Shafqat Tanvir Mirza and his predecessors like Asif Khan and Sibt ul Hassan Zaigham and alike. In his struggle for raising his voice in favour of his mother tongue, SRM was jailed for a few times also.

Safir Rammah from Academy of Punjab North America wrote in the Journal of Punjab Studies Fall 2012 “In 1970 Shafqat Tanvir Mirza launched the Pakistan People’s Party’s newspaper Mussawat with Munno Bhai and Hanif Ramey but after a few years, he moved back to Daily Imroze. In 1978, he was fired from Daily Imroze and was put behind bars for opposing General Zia’s military government. He was arrested multiple times for his campaigns for freedom of speech and protests against military regimes. He spent his jail time in Central Jail, Karachi, Kot Lakhpat, Lahore and Central Jail, Bahawalpur. His wife was also arrested for protesting against the death sentence of Zulfiqar Ali Bhutto and spent some time with him at the Central Jail, Karachi. He worked for Nawa-i-Waqt for a while and regularly wrote for the left leaning weekly journal Viewpoint during General Zia’s regime. After General Zia’s death, he rejoined Daily Imroze and he was its editor when it was closed down in 1991. Since then he was a regular columnist for Dawn”.

STM was a bold writer and used his pen to expose the injustices to Punjabi language by the Punjabis in connivance with non-Punjabis. He believed that Punjabi politicians were illiterate in terms of Punjabi and Saraiki languages and literature. It was not their fault. They never studied in their native languages

In 1963, STM was secretary of Writers Guild Punjab Region. The aim for making this organization was to extend support to Ayub Khan’s regime by the youngsters. In a function held in Lahore Museums Hall Najam Hussain Syed read an article on Shah Hussain. Safdar Mir and Asif Khan participated. Audience was in awe when Inayat Bai Bhairowali from Taxali rendered Shah Hussain’s Kafi. The session concluded with the demand that demanded Punjabi to be introduced at Primary Level in schools and made working language in the provincial assembly. Resultantly STM was removed as Secretary of the Guild. From that day onwards STM who was already an established Urdu writer and was being printed in the prestigious literary journal Naqoosh, resolved to write only in Punjabi and promote this language at all forums even if he had to express in other languages. From 1963 t0 1970 ATN spent all his energies for advancement of his cause; that is promotion of his mother tongue whether through Punjabi Adabi Sangat or through Majlis Shah Hussain. For the first time he fought from the forum of left wing politics. Shahzad Ahmad, Eric Cyprian and Professor Manzoor Ahmad joined hands. Ahmad Ali of daily dawn, Mazhar Ali of Viewpoint, Ahmad Nadeem Nadeem Qasmi and Faiz Ahmad Faiz also raised their voices in favour. 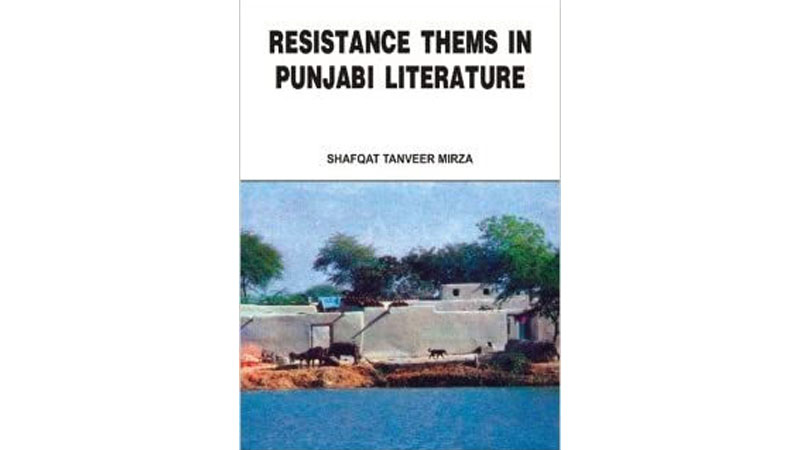 STM was hopeful that if Sheikh Maujib ur Rehman became the Prime Minister, he would ask for Bengali as language of East Pakistan and in that flow the cause of Punjabi would also gain favour. Dr. Ahsan Akhtar Naz Director Institute of Communication Studies, Punjab University wrote on STM’s demise in the daily Nation on 21st Dec 2012 that from his (STM) views, he (Naz) figured out that he was, though in favour of socialism, but his thoughts weren’t against Islam. He was deeply aggrieved at the separation of East Pakistan. He told Naz with grief that whenever he met people from East Pakistan, he would narrate a line in Punjabi and would translate for them.

Writer Zubair Ahmad said in one of his columns that when he went to enquire the health of STM, the latter was disappointed that he could not manage to get Punjabi language adopted in schools at primary and middle levels. So it is the duty of the present generation to further the cause of STM like Baba Fareed had said:

Saira Dar had further observed that she can just reiterate the values he expounds, and reaffirm the need for maintaining a deep and abiding relationship with one’s motherland and mother tongue. Mirza’s journalistic career has been problematic as he did not compromise on his principles all his life. STM was always very proud of his wife when he was arrested for protesting against Zulfiqar Ali Bhutto’s death sentence in Zia regime.

* Making of a Nation (English)

* Booha Koeena, a Punjabi translation of No Exit by Jean-Paul Sartre

STM also wrote in Urdu language including that included Shah Hussain, Sachal Sarmast, and others, as well as two books in English; Resistance themes in Punjabi literature, and Making of a nation. There are other literary accomplishments besides these, and his critical analyses of various publications in Punjabi or about Punjabi literature are well respected for their acerbity.

STM bagged Pride of Performance Award by the President of Pakistan in 2005.