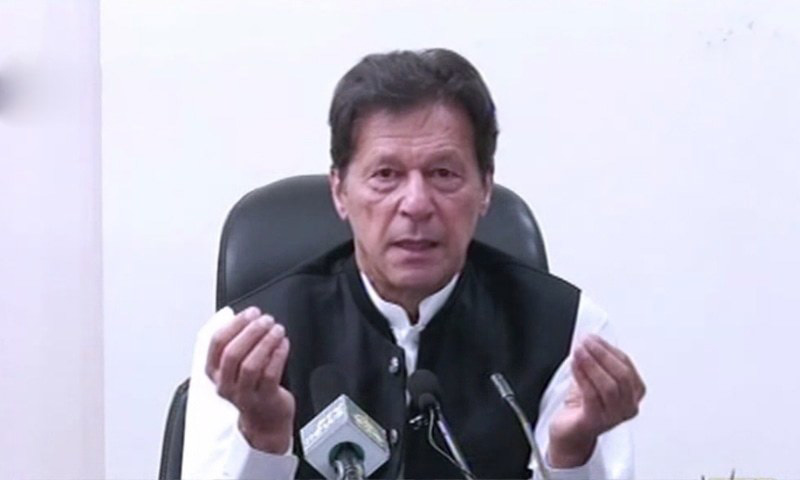 Prime Minister Imran Khan Saturday said the country cannot sustain a prolonged lockdown as labourers and the daily wagers are suffering heavily due to closure of industry and businesses.

“The entire world is trying to restart economy. Places like New York where thousands are dying have also decided to re-open their industries,” the prime minister said at the launch of a web portal introduced to support individuals rendered jobless due to the pandemic. “Even rich governments are reopening because they have realised that they cannot keep the country under lockdown for long. That is why we also have decided to open our construction industry,” he added.

Earlier, Prime Minister Imran Khan formally launched the web portal to financially support those eligible individuals who have been rendered jobless due to Covid-19 pandemic. Under the initiative, the disbursements from the PM Covid-19 Relief Fund will be made to those who have lost their jobs as a result of the crisis under the Ehsaas Emergency Cash. A web portal has been set up and applications are invited from those who fall in the categories mentioned in the drop menu of the application which can be accessed on https://ehsaaslabour.nadra.gov.pk/ehsaas/.

The prime minister said the government is providing succour to the downtrodden and underprivileged classes through its flagship Ehsaas programme which is unprecedented in the country’s history. He said under this programme so far, Rs 83 billion have been distributed among 6.8 million families in three weeks. He said under the second phase, those individuals will be supported who have lost jobs during the pandemic. Any person who has been rendered jobless can visit the website and get himself registered by proving his job particulars.

The prime minister observed that they are aware that a number of people do not know how to proceed on the process, but they can seek help from the students whereas the Tiger Force can also prove handy in this regard. The registered people will be scrutinized and only qualified individuals will get the cash support under Ehsaas programme, he added.

The prime minister assured donors that their donations for the PM Covid-19 Relief Fund will be judiciously distributed in a transparent manner. He said he will personally monitor the whole process and an audit of the whole amount will be conducted and shared with the nation.

The prime minister further said the government will contribute four times to every donated rupee in the relief fund so that maximum relief could be provided to the jobless people. “The distribution will be made on merit and there will be no political interference. All deserving will get the support on merit irrespective of their political affiliations,” he added.

The government is also facing other ordeals, he said, and mentioned that tax collection has seen a plunge of 35 per cent due to the pandemic. For arresting the financial impacts upon public after the coronavirus outbreak, he maintained, the government has slashed petroleum prices to provide further relief to the public.

He said the petroleum prices in Pakistan are currently the lowest when compared with the whole region, particularly with India and Bangladesh. He said in a span of one month, the government has reduced price of petrol by Rs 30 per liter, diesel Rs 42 and kerosene Rs 45 per litre. The chief secretaries of all the provinces have been directed to ensure reduction in the prices of different commodities in the wake of petroleum prices cut as announced by the government, he added.

The prime minister urged the nation to show discipline and prudence to face the challenge, and stressed upon observance of the social distancing with all the precautionary measures. He said nobody can predict for how long this crisis will last, so the people should take extra care and practice self-discipline. He also requested the people diagnosed with Covid-19 positive to go into quarantine into their homes with all the proper preventive measures as all the infected patients do not require to be taken to the hospitals.

The prime minister expressed his displeasure with treatment of infected people by the police force, and reiterated that in independent societies, these things did not take place. About latest coronavirus pandemic situation, he said that global efforts are being made to resume businesses and trade activities, even the hardest hit countries in the West with sound economies are opening different sectors as they had realized that continuing with the prolonged lockdown was causing negative impacts. The prime minister said they have opened the construction industry to provide relief to the labour class and daily wagers. These incentives which the government has announced for the industry are unprecedented, he added.