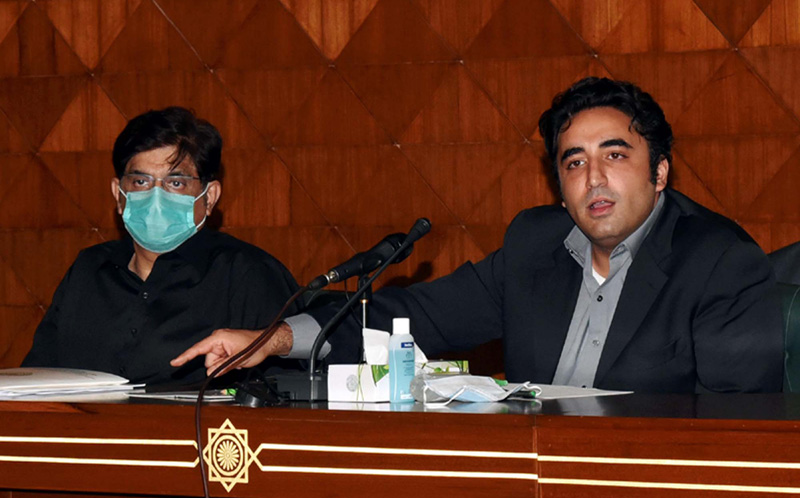 “If the prime minister is unwilling to work, if he only wants to be the premier of Islamabad, then it will be difficult to combat coronavirus pandemic,” the PPP chief told a press conference. “No prime minister in this country’s history has displayed this level of ignorance and left his responsibilities during a national crisis,” he said. “When people get infected with this illness, when they start suffering, it is the government’s responsibility to help them,” he added.

He accused the PTI-led government of sabotaging the Sindh government’s efforts to tackle the coronavirus outbreak. “The federal government has sabotaged our every attempt through their speeches […] from the start. Through their incompetency, they have let down each and every province,” he said.

Responding to a question about the government’s assurance that the number of deaths is lower than feared, Bilawal said he agrees that the country’s case numbers and death rates are ‘not as bad as Italy, Iran or the United States’. He said, however, that a two per cent fatality rate is still big.

Bilawal slammed the PTI-led government over its ‘failure to fulfil basic demands of the doctors fighting coronavirus on the frontline’. “Can you imagine Pakistan declaring war and sending its army without guns, bullets, and a uniform?” he said, adding that the doctors are only demanding two things: protective gear and a reduced burden on hospitals so that they may carry out their jobs more effectively. “The prime minister has failed to deliver […] He mentioned daily wagers in all of his addresses, but sadly none of them has received a single dime yet,” he regretted. “It is our responsibility to provide for them like we would provide for our armed forces, he said, adding, “We are trying to provide for our doctors who are in contact with COVID-19 patients, I know that all provincial governments are playing their due role as well. But the Centre should also play its role in supporting the provinces in the war against coronavirus.”

“These are pressing times, but 74% of our labour force which comprises daily wagers are affected the most during these times,” he said. “In collaboration with the BISP, the Centre disbursed cash to the already registered beneficiaries but the daily wagers did not receive any thing,” he went on to say.

“The federal government has announced Rs 2 billion for daily wagers after which it was revised to Rs 70 billion, but none has received a single rupee. During a national crisis, we cannot afford a delay [in such matters]. The Centre will have to take responsibility,” he added.

Bilawal said 400 doctors have been diagnosed with the disease, while nine have died. “I pay my respects to them,” he said, adding, “We also pay our respects to the daily wagers who have lost their livelihood due to the lockdown. PM Imran should also pay respects to them and also show practical steps.”

The PPP chairman regretted that he has kept aside politics and announced that he considers PM Imran ‘the prime minister as well as the health minister’, but the response from the Centre is not the same. “Every hour they criticise and attack my team; we never responded to their attacks,” he said, adding, “But now, because they have targeted my province in every public appearance, I need to set the record straight.”

Bilawal said that all the provinces – since the pandemic struck Pakistan – have tried their best to build national unity, but the federal government sabotaged their efforts. “The Centre has let down every province of Pakistan. They have caused damage to every province due to their incompetence,” he added.

The PPP chairman said the Centre let down the Balochistan government and its people at the Taftan border. “They did not fulfil their constitutional responsibilities by providing them enough resources to facilitate and test the people present in the quarantine centres,” he said, adding that the Punjab government was also let down during the Raiwind gathering, where the federal government should have notified the province about the necessary precautionary measures that they should have taken to curb the spread of the pandemic and to safeguard the people’s lives.

Bilawal said that the federal government has let down the Sindh government ‘every single day’. “The provincial government and the bureaucracy has worked day and night to save the lives of the people and have constantly endangered their families,” he said, and demanded to know why the chief minister of Sindh is targeted repeatedly but no questions the performance of the chief minister who asks ‘how does coronavirus bite?’

Bilawal regretted that ‘only that province is made a target which is working the hardest despite scarce resources’. “Where no work is being done, where the people’s lives are put in danger, may it be Islamabad, South Punjab, FATA and GB, no one asks questions about them and neither are they supported,” he said. “I fear that that the premier does not know that due to his speeches, his character, his team’s character, Karachi might become the next New York,” he said, referring to the state that is the worst-hit by the infection in the United States. He said that he fears that the disease may spread rapidly in Karachi as it is the most densely populated city of the country. “So far, all the provincial governments have done 90% of the work with their available resources. We have not received a single penny for enhancing our testing capacity, to enhance our healthcare capacity, to carry out relief operations, to stabilise our economy,” he added.

Referring to the premier’s remarks whereby he said the lockdown in the country was imposed by the ‘elite without thinking of the poor’, he asked, “Who are these elites that have imposed a lockdown on us?” He said the extension in the lockdown was decided on the basis of the suggestions given by KP and Punjab governments. “A federal minister extended the lockdown till May 9,” he said. “So were they the elites who imposed the lockdown on us?” he questioned once more. “Who will help the premier understand that he is the prime minister of the country and [no longer] a person standing on a container? We are facing a national crisis. Get down from the container and do your job. Become the prime minister,” he said, adding, “We look towards our country’s leadership to support the people and the provinces during these pressing times.”

“The Centre has failed to support us on both ends – they have neither given us aid to enhance our healthcare system nor are they willing to provide support to our economy or to the daily wagers,” he said, adding that if provinces are able to defeat the pandemic then it will ultimately be a victory for the federal government. “If he cannot aid us then he shouldn’t criticise us at least,” said Bilawal, of the premier, adding, “I urge the prime minster to stand with us on the stance to restrict people indoors.”

Circling back to the issue of PPE, Bilawal asked whether Pakistan can conscionably ‘become the only country to do nothing for their medical workers’. Answering his own question, he said, “No! Pakistan is a country which stands its ground even while being surrounded by countries like India and Afghanistan. We have seen wars, we have encountered terrorism and we can face this pandemic.” The PPP chairman said the Centre now has fiscal space because they have been given aid by international organisations. “If he cannot work as the prime minister of the country then he should resign and let someone else take his place,” he concluded.