COVID-19, Afghanistan, and the peace process

The peace deal 2020 had raised hopes of finally bringing an end to the twenty-year long war in Afghanistan. It was February 29, and a historic deal between state and non-state actors was signed. The US had agreed to pull out troops whilst the Taliban agreed to a ceasefire. The Afghan government was to release 5,000 Taliban prisoners as part of the deal.

No deal is perfect. Even if it is, materialising it to its fullest is usually not possible. Many internal and external elements hamper the process. The US had made it clear that if the Taliban deviated from the agreed terms regarding the future of Afghanistan, they would come back. Likewise, the Taliban had their reservations as well. In the centre of the entire development the Afghan government tried to keep up its de-jure control of the country. And that is the main problem. The Taliban with the de facto control are not willing to negotiate with what they term as the “puppet regime.” Despite complications, many are hopeful that if a peace deal can be signed, peace can also be achieved in real time.

With currently less than 400 reported cases the Afghan minister of health fears that eventually 80 percent of the country could be affected by the virus, fearing a death toll of more than 100,000

Unfortunately, in the midst of actually working on making peace possible, COVID-19 has come to haunt. It has stunned the world, suffocating economies of the world powers and diverting political attention in a different direction. Everyone is suffering. The difference is that some countries have appropriate and enough resources to deal with the pandemic whereas the others do not. Let’s talk about Afghanistan. It has been hit hard by the pandemic. With a deplorable health sector fighting the virus is going to be grim. The country has poor testing facilities and no money to arrange for them.

With currently less than 400 reported cases the Afghan minister of health fears that eventually 80 percent of the country could be affected by the virus, fearing a death toll of more than 100,000. The US’s decision, last month, of slashing $1 billion aid to Kabul has made matters worse. Experts fear that Afghanistan will not be able to tackle the pandemic with the available budget. 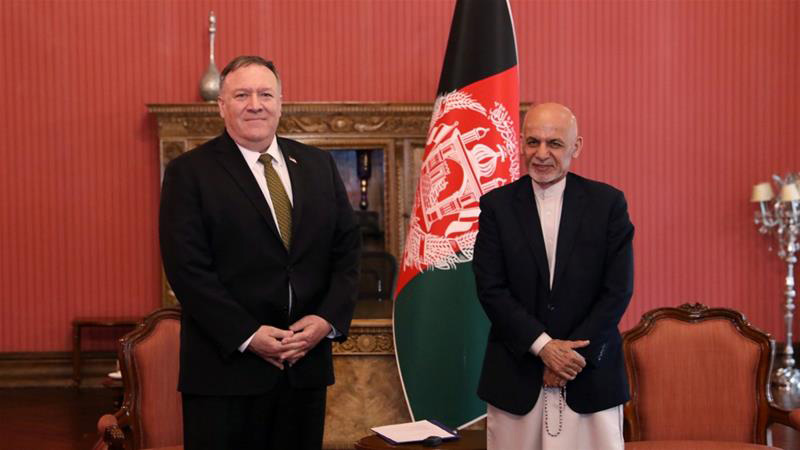 The looming threat over Afghanistan is not only COVID-19 but also the political instability that it will bring to the land. Merely a month has passed after the signing of the deal and unrest has started to surge. The Taliban recently issued a statement, accusing the US and its allies of “violating” the deal when there was a delay in the releasing of 5,000 prisoners from the Afghan government’s custody. With this also came a threat of an attack on any outpost of the government. This is not a good omen for peace.

The Afghan leadership is stuck in a pincer movement. The government not only faces a threat from the Taliban but also the deadly pandemic. On the other hand, the Islamic State appears to have built a strong footing in the land. The attack on the Gurdwara Har Rai Sahib in Kabul speaks for itself. The bigger question amid this chaos is about the future of Afghanistan and other related global actors. What happens after the world gets out of this pandemic? We need to think about it because sooner or later it is going to happen, and we will have to deal with the issue.

COVID-19 has put the global economy into recession. The USA is suffering a great deal of loss from the pandemic. Its economy is being crippled. Experts believe that some countries are expected to come out of the recession by 2021. This gives a new dimension to global politics. The US that has played the leading role in global politics would be damaged critically. Without sustainable economy the US will experience a reduction in its power to exercise influence or use military to coerce. A weak economy means skimming down military expenditures. Therefore, focus would be to revamp the economy and improve the situation at home. The very least of the US’s effort would be to send military to troubled lands like Afghanistan. A weak economy does not allow such expenditures unless one wants to further worsen the situation, and it is clear that no one wins an election, which happens to be this year, on the basis of a struggling economy.

China, which is already getting back on its feet after being first hit by the virus, will be a major threat to the hegemony enjoyed by the US since the end of the Cold War. In this scenario it is quite possible that the Afghan leadership will be left alone to struggle for power with the Taliban, thus bringing us back to an anarchic state that was to be avoided by signing the peace deal.

On the other hand, in Afghanistan, the current government that is already frail will cease to have any real power left without the active support of its allies. Lawlessness will emerge in the war-torn and coronavirus-struck country. The Taliban might rise and take Afghanistan under their umbrella. The Islamic Emirate might be on its way, a scenario that many in Afghanistan already fear. After all, the purpose was not to build an Islamic emirate but a country where democratic norms were followed and a country that could peacefully exist as a no-threat state for the Western powers.

Regional players like Pakistan are also impacted in several ways by what goes on in its neighbouring country. For one, Pakistan does not want instability to once again surge into the region and cause an influx of refugees into its border like after the soviet invasion. Once the Taliban regime is unrestrained by any external force, it will bring about laws that will not be supported by masses, and especially the civil society in Afghanistan. Therefore, not only Pakistan but Iran in the region will see a surge of incoming people. As the past teaches us, giving refuge to migrants is not an easy task. We have already dealt with the internally displaced person crisis. This time we are also dealing with a global pandemic and will not have resources to cater to external elements.

Pakistan cannot take the risk of gambling on politics played on the Pakhtoon identity. Already, the state has reservations on movements such as the PTM. The establishment is not willing to take any risks that might compromise national interests. The state does not want a neighbour that we share culture with to cause undesirable influence and actions from across the border. We must not undermine the ability of an unfriendly Kabul to stimulate unwanted elements on our side.

It is, therefore, imperative for the western powers, especially the United States, to help Afghanistan ward off this pandemic and make sure that the terms of peace deal are fully protected in spirit. We do not want to make an exit from this global pandemic and enter a new chapter of crisis that we have already experienced for the last two decades. Only this time it might be more catastrophic than before. Pakistan needs to take issues such as border security more seriously. It must persuade the US to pull out troops, proportionally, with an improving situation in Afghanistan. It would be a grave mistake if the US leaves the land its troops have inhabited for two decades on its own. This would be unjust to the Afghan people, Afghan government, regional players and the US taxpayers themselves who have paid billions of dollars for success in Afghanistan.

The writer can be reached aliabdullah023@gmail.com