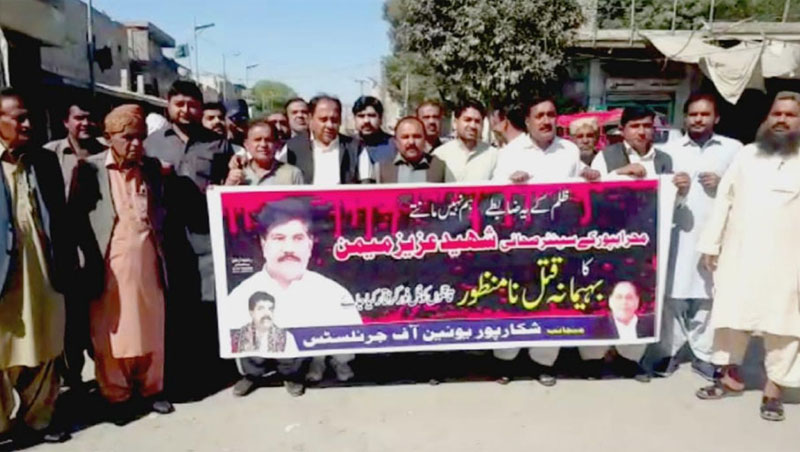 A massive protest rally was taken out on Monday by the Shikarpur Union of Journalists to express its great concerns and sorrow over the brutal murder of a senior journalist at Mehrabpur, a town of district Naushahro Feroze of Sindh province, and demanded arrest of murders.

The rally was led by Agha Israr Pathan, Abdul Salam Unar, the president and general secretary, respectively, and others.

Speaking on the occasion leaders including Rahmatullah Soomro, Sodho James, RB Jamali, Jameel Mahar, AK Soomro, and others strongly condemned the brutal murder of a senior journalist namely Aziz Memon, who served at least two decades in the field of journalism, and expressed their great sorrow and anger and termed it an attack on journalism by influential persons of the area because slain Aziz Memon always highlighted the issues related to public therefore who has been killed.

AK Soomro said that Pakistan is a democratic Islamic country where a few influential persons have been endeavoring to curb media freedom, but who would not be succeeded in their intentions, because the voice of justice could not be mitigated for the welfare of the people of Pakistan and mainly Sindh.

Mr. RB Jamali and Zahid Noon also spoke and said that though the Chief Minister of Sindh has taken the notice of the killing of martyred journalists, while CM Sindh should personally monitor the overall inquiry of the brutal murder.

However, journalists were very angry and threatened if justice would not be served who would extend their protest movement across the country to protect the rights and freedom of media.

A large number of journalists of Shikarpur district belonging to its tehsils including Khanpur, Garhi Yasin, Lakhi Ghulam Shah also participated and condemned the killing of a journalist at large.