Hope for peace through students

* In this time, talking peace is surely a difficult one, that also for India-Pakistan 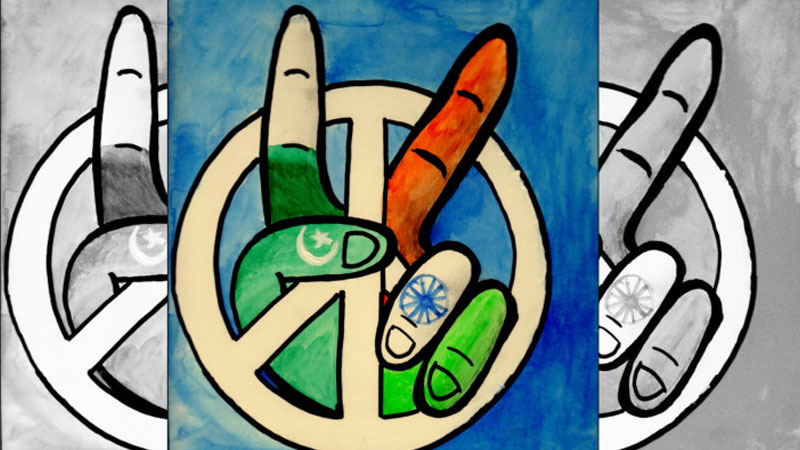 If we are to reach real peace in this world and if we are to carry on a real war against war, we shall have to begin with children; and if they will grow up in their natural innocence, we won’t have to struggle; we won’t have to pass fruitless idle resolutions, but we shall go from love to love and peace to peace, until at last all the corners of the world are covered with that peace and love for which consciously or unconsciously the whole world is hungering.” – Mahatma Gandhi

As the world is observing 150th year of Mahatma Gandhi, a person who is known for his ideas of truth and non-violence without fear, there is also need to look upon prevailing situation of present world, particularly the region from where he originally belonged- the Indian sub-continent. In fact, present day sub-continent is facing a time of crisis and it demands more and more ideas of people who advocated peace. Kashmir, which was once seen as ‘Ray of Hope’ by Gandhi, has recently faced severe restrictions of curfew, internet ban, arrests and house arrests and many are still under this fear. Borders are volatile and regularly taking lives of soldiers and civilians. Political relations between Pakistan and India are in bad taste and a TRP hungry media is fuelling lot many things with it.

In this time, talking peace is surely a difficult one, that also for India-Pakistan. But we know that there are always some light and we need to search for it and as Gandhi believed, we should learn from children. Pakistani and Indian students choose to paint for peace even in this time when the whole environment is filled with hatred and violence, suppression and attacks. These paintings are part of annual program of Aaghaz-e-Dosti initiative that mostly works with school students of Pakistan and India and also bring a peace calendar every year from selected paintings of both sides.

Students who painted a piece of paper with their brush can be interpreted through their beautiful paintings where they express desire for peace. Since the last eight years, these paintings are coming regularly to become part of a calendar where six paintings from each sides form 12 calendar months and reflects an everyday peace. School students who participate and submit their paintings are seem well aware about the ‘need’ and this is added with their own imagination. Paintings can be seen with Badshahi Misque and Tajmahal, Peace boats, barbed wires with students shaking hands, planting flowers and trees on border, Soldiers together shaking hands and hugging each other, birds flying above and to contemporary one like opening of Kartarpur corridor as symbol of peaceful gesture.

We need to recognise the need of future generation. Any child in these countries actually deserve a peaceful and safer future, free from violence and hatred. India and Pakistan, being two sovereign countries and strong stakeholders in South Asian region, should take positive steps to strengthen understanding and focusing on the way forward. These two countries have rich heritage, culture, history, natural resources, and talents in their own countries and if they decide to move together, there are ample scope of moving towards excellence.

Education is the key to ensure an informed and civilized society and students get affected through their environment and learn things and make an image about each other’s country and people. But whenever, they get opportunity to think it deeply and to think naturally, they come with their idea of peacebuilding. While involving students for such actions for peace, nothing new is being given to them, instead it is like exploring their own idea, the natural instinct for peace that we all, as human being, irrespective of our individual identity, carry.

These expressions are learning for others and a ray of hope in present times when despite not being able to meet or cross boundary, there are young voices to whom all the hatred propaganda and media portrayal cannot divert from the path of peace and we need to support all such actions for peace, wherever these are happening.

The writer is the founder of Aaghaz-e-Dosti which is an Indo-Pak friendship initiative. He Tweets at @ravinitesh and can be reached at ravinitesh@gmail.com