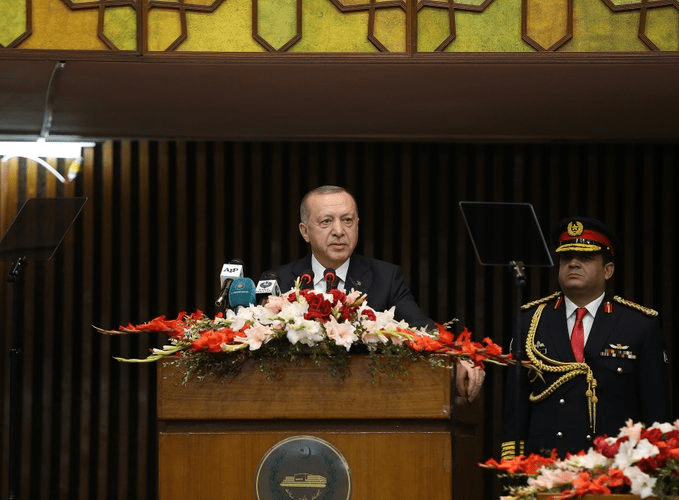 ISLAMABAD: Turkish President Recep Tayyip Erdogan on Friday, stressing a ‘peaceful and just solution’ to the Kashmir dispute, said Turkey would continue to extend unflinching support to the stance of Kashmiri brethren at all fora.

“Turkey believes that the Kashmir issue can not be resolved through oppressive means, but on the basis of principles of justice and peace,” the Turkish president said in his address to the joint session of Parliament.

This was the fourth time Tayyip Erdogan addressed the Parliament of Pakistan – earlier twice as Turkey’s premier and once as president.

The 24-minute speech of Tayyip Erdogan, who arrived here Thursday on a two-day official visit, focused on Pakistan and Turkey’s joint road-map of development and prosperity, Turkey’s support for Kashmir cause and need for unity among Islamic countries to fight common challenges including poverty and Islamophobia.

President Erdogan mentioned that Turkey openly defended the just struggle of Kashmiris at the 74th session of United Nations General Assembly in New York and during all meetings of the Organization of Islamic Cooperation
(OIC).

He said India’s unilateral step on changing the status of Jammu and Kashmir had further aggravated the problems faced by Kashmiris.

“Curbing the freedom rights of Kashmiris and putting them under siege, will be in no one’s interest,” he said, adding only peaceful negotiations could pave the way towards solution acceptable to all stakeholders.

Erdogan stressed that apart from their mutual rifts, it was religious duty of all Islamic countries to stand for the oppressed Muslims anywhere in the world, may it be in Palestine, Cyprus or Kashmir.

President Erdogan said Pakistan was heading in the right direction in its journey towards development and mentioned that the tough road to prosperity required determination, faith and struggle as main ingredients.

He expressed the confidence that in an environment of cooperation among legislature, judiciary and armed forces, Pakistan would soon reap fruits of economic stability as immense foreign investment poured in during recent months.

Erdogan said he had arrived along with a high-powered delegation to participate in the sixth meeting of Pak-Turk High Level Strategic Cooperation Council with heavy agenda on strengthening business relations and other areas.

He said a road-map would be devised based on strategic economic framework, outlining trade, investment infrastructure and tourism.

“The 210 million people of Pakistan and 8.3 million Turkish people will stand shoulder-by-shoulder in achieving their common goal of strong bilateral economic ties,” he added.

He recalled that implementation on the previous agreements, reached upon during visit of Prime Minister Imran Khan to Turkey, was in full progress.

Erdogan said he was well-aware of the difficulties faced by Pakistan in dealing with aftermath of regional conflicts as Turkey itself braved for 35 years, the terrorist and separatist activities of extremist outfits including Daesh, Kurdish PKK and Fetullah Gulen’s FETO.

He thanked Pakistan’s for allowing to take over FETO-linked schools in Pakistan by Turkey’s Maarif Foundation and also for supporting the ‘Operation Peace Spring’ military operation conducted by Turkey in north of Syria.

“Contrary to those indulging in mere rhetoric of democracy and human values, Pakistan has always extended a real support to Turkey for which we are extremely grateful,” he said.

Erdogan assured Pakistan of continued support on all issues including its stance on Financial Action Task Force (FATF).

He lauded Pakistan’s efforts for resumption of peace in Afghanistan with an objective of regional stability.

The Turkish President criticized the peace plan, presented by the U.S. President Donald Trump, saying it was meant to illegally occupy the land. He also condemned the Israeli attacks on the Bait-ul-Maqdas.