China and Myanmar have recently concluded 33 agreements pertaining to the development of China-Myanmar Economic Corridor (CMEC); the corridor connecting the Kyaukpyu seaport (Western Myanmar) with Kunming, capital of Yunnan province (Southern China) through railways and highways. The agreements were signed by President Xi Jinping and Myanmar’s State Counselor Aung San SuuKyi, during President Xi’s visit to Naypyitaw, Myanmar (18-19 January 2020). The visit also marked the 70th anniversary of diplomatic ties between the two countries. The CMEC is part of the Belt and Road Initiative (BRI); President Xi has labeled CMEC a “priority among priorities”. The corridor will provide China easy access to Indian Ocean. For Myanmar, the corridor will help boost the economy projects to be developed within CMEC framework include the “Kyaukpyu Special Economic Zone,” “new Yangon City project,””Mandalay Industrial Zone”. Within the country, the corridor will pass through cities of Mandalay, Yangon and Rakhine state. The corridor will also make Myanmar diplomatically strong, often being criticized over the issue of Rohingya, and strengthen the country’s strategic positioning vis-à-vis the region. 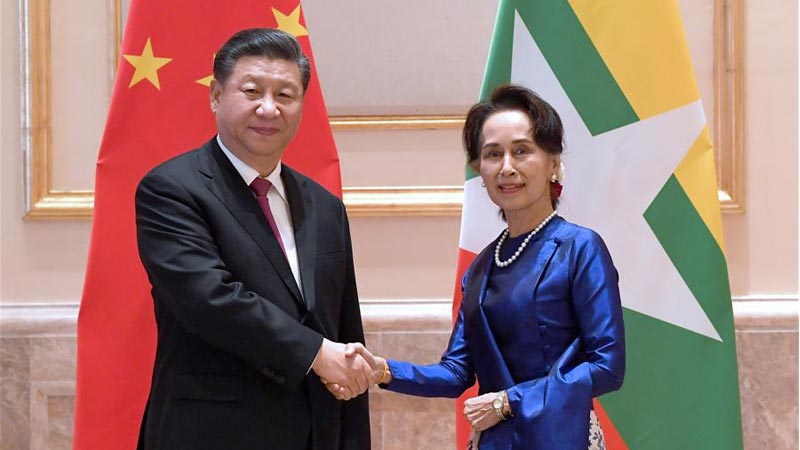 China’s the building of seaports as part of Belt and Road Initiative (BRI) is to enhance inter-regional connectivity. The initiative is also an opportunity for the developing economies. It will help build the infrastructure, and transportation links, which, in turn, will facilitate the trade activity. The economic and technical endeavours will benefit developing economies. It sure will promote economic integration as well as interdependence. Myanmar, being an ASEAN state has stepped up political ties with China. For Myanmar, the Kyaukpyu seaport and CMEC will generate economic activity. The oil pipeline from the port of Kyaukpyu to China’s Yunnan province has a capacity of 22 million tons (annually), and the gas pipeline has the transportation capacity of 12 billion cubic meters. The China-Myanmar the expressway will link the Yunnan province (Southwest China) with Kyaukpyu, a major town in Rakhine state (Western Myanmar). The construction of seaport coupled with industrial growth, the technical exchange will foreign entrepreneurs will be a learning opportunity to the local industry, and it will also multiply job opportunities.

Both China and India have expanded their geopolitical horizons

Seeing the building of corridors from a geopolitical lens, the economic ingress to other regions /and countries carries political impact as well. States’, in order to grow, widen their geopolitical horizon, expand beyond the regional sphere, diversify foreign policy and trade links. Both China and India have expanded their geopolitical horizons. China’s BRI could be termed as a trans-regional and global endeavour to secure energy supplies and trade links. In particular, the initiative will reinforce China’s presence in the Indian Ocean. The building of seaports will promote trade activity at intra-regional and inter-regional levels, and it will empower the countries economically. Meanwhile, the competition at the regional front and the involvement of outside players cannot be ruled out as well. India has been opposed to China’s building of ports in South Asia, in particular, it has raised voice against Gwadar and has even employed subversive means to disrupt the development work. The CMEC reaching out to Bay of Bengal, and Andaman and Nicobar islands might raise concern among the littoral states. Likewise, in Asia Pacific, the new term coined to describe the political construct is “Indo-Pacific”, which speculates India’s larger role in the region, which could be in contrast to prevailing political order. The regional countries, in order to gain from this power competition, might look for hedging strategies and will try to balance between the competing powers. In this power equation, the regional connectivity coupled with economic interdependence will strengthen the forces of regionalism. But will the dividends of economic connectivity deter the conflictual approaches or the regional powers’ competitive pursuits will outmaneuver the prospects of economic integration?