Despots of a feather, flock together: how Modi is taking authoritarian lessons from Hasina

On the night of the 5th of January, residents of New Delhi went to bed to the news of masked and armed goons unleashing on students at Jawaharlal Nehru University. The beginning of this horror story traces back to early December when the Bharatiya Janata Party government passed the controversial Citizenship Amendment Act, which provided accelerated citizenship to persecuted minorities from Afghanistan, Bangladesh and Pakistan. This triggered a nationwide protest, initially by students and later joined by people from all walks of life, who felt this Act was an assault on the secular fabric of India.

While most protests have been largely peaceful, some universities, such as the Jamia Milia Islamia and Aligarh Muslim University, witnessed violence with protesting students being beaten and often arbitrarily arrested. These events led up to the night of the 5th of January, when masked thugs armed with sticks, allegedly of the Akhil Bharatiya Vidyarthi Parishad, the student organisation affiliate of the Rashtriya Swayamsevak Sangh and Bharatiya Janata, laid siege on the students at Jawaharlal Nehru University while police stood outside the university premises as silent observers.

Any person who is aware of what has been happening in the subcontinent cannot possibly miss the similarity of what happened in New Delhi to what Dhaka witnessed during the road-safety protests in 2018. Triggered by a road accident that killed two college students, the entire capital was brought to a standstill by protesting students demanding safer roads. By the fifth day, the Hasina-led government had had enough and unleashed not just the police, but also armed thugs from its student wing, the Bangladesh Chhatra League, on the protesting students. Worse still, the government was completely in denial about what followed in the streets of Dhaka and failed to take any sort of legal or institutional measures against Bangladesh Chhatra League excesses. This naturally brings us to the conclusion that the government is either incompetent or, ore likely, complicit. 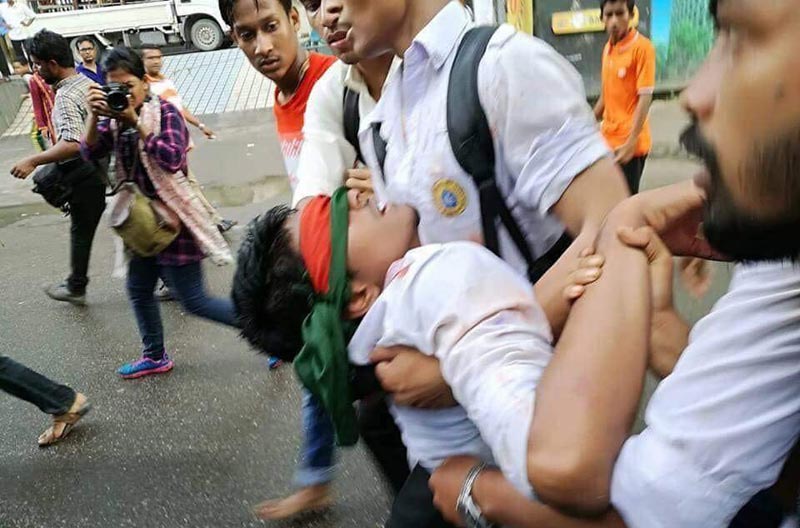 The governments’ inability to allow peaceful protests is not the only element that binds the Indian and Bangladesh governments together. Both governments have engaged in a concerted effort to subvert all state machinery. Anyone who lives in Bangladesh would know how politicised the supposedly independent institutions of the state are. The same appears to be the case in India. From having a pro-ruling party biased election commission (just like in Bangladesh) to a Supreme Court where four senior judges spoke publicly against the Chief Justice Dipak Mishra, accusing him of political bias (in Bangladesh, the Chief Justice was forced to resign following conflict with the government) to an army chief who overstepped his boundaries and openly criticised the ongoing student protests, it seems Narendra Modi has picked up quite a few traits from Sheikh Hasina.

For years, we had believed it was Dhaka that took governance lessons from Delhi. With similarities between how Hasina and Modi have transformed into authoritarian regimes becoming evident, has the tail finally started to wag the dog?

Another area where India seems to be following Bangladesh’s footsteps is in its attempt to silence dissent. In Bangladesh, anyone criticising the government is immediately labelled a “razakar” or “Jamaati” (as if that constitutes some legitimate form of criticism). India seems to be going down the same path. Since the Bharatiya Janata Party government came to power in 2014, there has been a concerted effort to silence any sort of criticism by labelling the purveyors an assortment of adjectives including “anti-national”, “Khan market gang” or “Lutyens gang” (both references to the Khan Market, an upscale shopping district in Lutyens, and used to derisively refer to the entitled), “tukde-tukde gang” (a reference to those who want break India apart), and more recently, “urban Naxal” (a reference to the Maoist Naxals in the eastern India).

Unfortunately, this name-calling is not limited to some fringe elements but has extended to mainstream politicians and even Bollywood celebrities and public personalities looking to cosy up to the government. To be fair, it could be argued that both Bangladesh and India have taken inspiration from an age-old strategy of deflecting legitimate criticism of Israel by conflating it with criticism of Jews and in essence labelling as anti-Semitism. This, in effect, serves to delegitimise and shut down any further criticism. Both Awami League and Bharatiya Janata Party seem to have mastered this art of blurring the line between the government and state very effectively.

Expertise in political witch hunts appears to be another thread that binds Bangladesh and India. Like the Awami League that has abused the legal system to systematically harass its political opponents including former Prime Minister Khaleda Zia and the Jamaat-e-Islami, the Modi government also very effectively exploited state machinery to harass those who dissent. For instance, immediately after Article 370 was revoked on August 5, 2019, and Jammu and Kashmir ceased to be a state, the Modi government locked up, justifying it as “preventative arrests,” the main leaders of the state, including Farooq Abdullah, Omar Abdullah and even Mehbooba Mufti, who, just a year prior, was their ally in the state government.

And in a complete replication of the Hasina model of governance, the Bharatiya Janata Party portrays itself in the image of a laundry machine–a party that inducts people with questionable background and later giving them clean chits. A recent example is the short-lived alliance between BJP and the Nationalist Congress Party (NCP) in Maharashtra. Just a few hours after Ajit Pawar, a leader of the NCP, joined the BJP alliance, news broke out that several corruption cases filed against him were withdrawn.

Another area where Modi apparently intends to outdo Sheikh Hasina is in his special ability in handpicking members of his cabinet, who are not just incompetent but have since made a name for themselves for making nonsensical statements. A case in point, Piyush Goyal, the Union Railway and Commerce Minister who, in an event on India’s economy, said about GDP calculations, “Don’t get into the calculations that you see on television … those maths have never helped Einstein discover gravity.”

This could have easily been passed off as a slip of tongue, but he went on record trying to clarify and ended up embarrassing himself even further by completely overlooking the same mistake that had caused the ridicule in the first place.

Theatrics aside, more recently, the Finance Minister Nirmala Sitharaman, in response to questions about the rising onion prices, made a very insensitive comment saying she comes from a family who are not in a habit of consuming onions.

The Bangladesh government never misses an opportunity to brag about how good their relationship with India is, especially since Modi came to power. Objectively, it is true that this relationship has seen some progress with the long-awaited enclave exchange and the $8 billion Lines of Credit extension. However, there are some issues that, despite years of bilateral discussions, have yet to be resolved, such as the Teesta water-sharing deal, border killings by India’s Border Security Force and more recently, the re-entry or possible infiltration of Bengalis into Bangladesh. It is, however, my earnest belief that after Sheikh Hasina has extended her generosity in demonstrating to Modi the art of being a despot, he will have the courtesy of returning the favour by giving these unresolved issues his utmost importance. After all, that is what friends are for.

The writer is an independent columnist based in the US