* The vacuum created by her loss shall never be filled 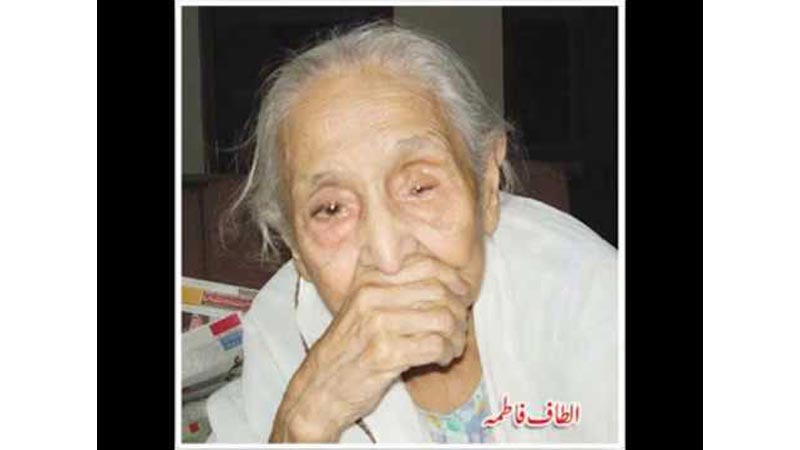 On November 19, 2018, I lost my loving Shamoo Khala; ever smiling and caring, her love was for all.

By profession she was a teacher and a lecturer, but that was her passion also. Her love for teaching, it was her deep love for education that she made her principle to teach small girls and boys of her locality without charging them, as money and worldly possessions she always hated and never wished for any materialistic thing. For the world of literature, she was Altaf Fatima, a versatile writer a multidimensional, superb fiction, short story, children’s stories writer and translator. Above all she was such a writer, that very few in literary circles can come closer to her way of writings.

The vacuum created by her loss shall never be filled. She was a writer with a unique and solitary style, always writing from the depth of her heart. Her debut novel Nishan e Mehfil which she wrote at a very early age was an instant hit. It’s a story of an English girl falling in love with a highly educated young Indian boy, though her first novel but has written in such a tremendously superb way that the readers are compelled to get in finished in one sitting.

Her second novel Dastak Na Dou is considered one of the best work in the Urdu language which was translated not only in English but in other languages as well. Her novel Chalta Musfir is probably the only fiction writing on the 1971 tragedy and then came Khuab Gar. Her short stories won the heart and soul of literature lovers, some of them have been published in book form. Her last short stories collection was Deed Wadeed, which got the best fiction award in the KLF 2018 edition, along with a cash prize which she very politely refused to accept.

Her last collection of short stories and some memories “Gawahi Akhiray Shab”.

Her second novel Dastak Na Dou is considered one of the best works of Urdu language which was translated not only in English but in other languages as well. Her novel Chalta Musfir is probably the only fiction writing on the 1971 tragedy and then came Khuab Gar. Her short stories won the heart and soul of literature lovers as some of them have been published in book form

Few stories few memories was published after she had left this world, in which she has written about some famous writers like Shahid Ahmed Dehlwi, Akhtat Hussain Raipuri along with the house hold helper Ghulam Muhammad Budha and his love for Kashmir, this shows for her all the human beings were equal and respectable. Once I found out her short stories collection “Wo Jisay Chaha Gia” published in 1969 at the road side old books shop at Anarkali, Lahore, bought it in just ten Rupees and took it to her to get her signatures along with loving remarks, on seeing her book she got excited saying “Baita from where you got this, we don’t have”(Always using the word We instead of I, as was the way of talking among the residents of Lucknow) I immediately offer her the book which she strictly declined saying with great affection that you keep it, just get me the photo copy of it, than pointing towards a small rug under a small table in her lounge she told me that the publisher paid her just a small amount out which she could buy only that rug, with great difficulty I could controlled my tears, on hearing this attitude of publishers. Such a great writer and in return getting almost nothing, I am sure the publisher of that book must have made a fortune out of that book.

Hailing from a literally family, niece of Rafique Hussain Jaffery ,she started writing at a very early age, her brother Fazl e Qadeer was a great critic of his times, while her sister Nishat Fatima was also a known figure and a great writer. Altaf Fatima is known to the world as a fiction writer and a great translator, but very few are aware of her personality as a human being about her hidden qualities, attributes and character, She was absolutely free from any worldly desires, lusts and urges. She refused to accept Pride of performance to be taken from a dictator ZiaUl Haque, she spent a very simple life and always kept a low profile declining to appear on media or to give interviews. When one of the famous film and drama producer wanted to produce a serial on one of her novels and repeatedly requested me to get an appointment with her, she very strictly and firmly refused to entertain the request of the producer, as firstly she never wished any publicity of her literary work and secondly she was very annoyed, and disappointed with the way her famous novel Dastak Na Do was presented in a serial form by PTV.

She never used her name or status as a great writer to seek any benefits. Her aim in life was not popularity but to write. Never in life she ever accepted any monetary reward or help from any quarter be that government or the literally organisations. Her love for Pakistan and the founding fathers was beyond words to express, she would never tolerate any one talking against Pakistan, Quaid e Azam or Allama Iqbal, she was a great patriotic Pakistani and wrote masterpiece short stories on the 1965 war, and always very quietly kept her philanthropic activities, helping the needy out of her meagre earnings’. She was extremely famous and popular in India among the literally circles , and every Indian author visiting Lahore, would definitely visit her at her Habibullah Road residence ,which she herself built in a unique style and architecture. Probably the last Indian writer to visit her was Anis Asfaq from Lucknow who came to Lahore to attend the 2018 edition of LLF, for the launching of his book “Khuab Sirab”, he with great love and affection presented his latest book to her. There were times when she almost lost her eye sight, but even in that condition she would never allow anyone to hold her hand, and would make tea herself for the guests, after hard pursuing of her relatives she agreed for the eye operation and in this way she got her eye sight back in one eye, she again started writing. She was an institution in herself with firm command on English and Persian she had a photographic memory even at the age of 92, remembering even the minute details of her youth and child hood; she used to quote Rumi in Persian in such a way as if reciting poetry of Ghalib of Iqbal. There are so many hidden aspects of her giant personality that it needs pages and pages to write. She was bold and wrote without fear or favour, she was progressive not as stylish leftist or for as a fashion, but from the depth of her heart, being a woman she would not hide from anyone smoking a cigarette very fondly, she was a genuine person in all aspects. Her love for humanity was above words to explain and that love had no boundaries, free from any strings of religion, cast or creed. Her students are spread all over the world, during her free time she would very fondly teach the children of her locality, definitely free of cost. She had a large collection of books and magazines. Not only that she was a great writer , she was an architect also , as she designed and got constructed her house at HabibUllah Road , naming it as “Kunj Galli” in a unique style and while sitting in her Lounge one feels as if sitting in a large villa airy and delicate with natural day light illuminating the whole house. With birds singing and eating in an open space especially created and designed for them, while Khala would always make sure that the water pot was filled with clean fresh water and there was enough food grains in the other pot.

Her company had always been so delightful that we never felt the passing of time as even a few hours of sitting with her and talking to her seemed like few minutes. What a collection of words she had and interesting true stories and history of the family to pass on to the next generations! She loved her nephews and nieces as her own children and their children as her own grandchildren. She was among those who could imagine the things in reality which is evident in her novels like Dastak Na Dou, Khuab Gar and Chalta Musafir though she had never been to China, Chitral or Bengal, but in these novels she has drawn the true picture of social, cultural and landscape of these area as if she had lived there, even has used their native language. With her demise, Urdu literature has lost a unique writer of a very different style who can never be compared to any great Urdu writer. She had her own style which made her stand out from many of her contemporaries. She was buried in Miami Sahib grave yard just beside her writer sister Nishat Fatima. While lowering her to her final resting place, I found her as light as a flower and a very peculiar smile as we conveying the message of love, affection and to remain happy smiling always not to complain not to hurt anyone.