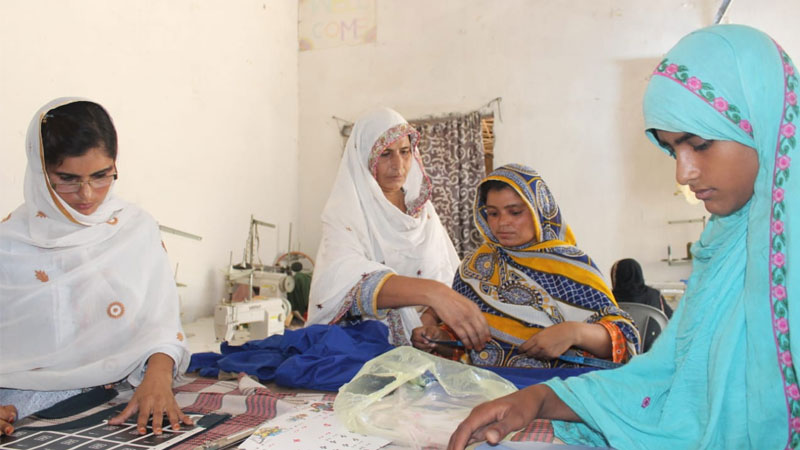 One of the leading economic constraints in southern Punjab is the lack of market linkages and management skills, especially for women.

Women are 50 percent of the workforce and most of them stay at home thus unable to contribute to the national gross productivity. The Punjab Youth Workforce Development (PYWD) project is striving to achieve at least 35 percent female inclusion out of the total 10,000 targeted youth through skills development, equal participation in decision-making, self-employment, and microfinance opportunities. The overall aim of the project is to complement the Government of Pakistan’s goal of poverty eradication and uplift the underprivileged sections of society, especially women, through employment and entrepreneurship.

25-year old Hafiza Kalsoom is spearheading a working cluster of 19 rural women who initiated a business stat-up branded as ‘Libas’. She approached PYWD facilitation center, established in her immediate neighbourhood, Chak #354, Tehsil Dunyapur, Lodhran. The odds were daunting for Kulsoom who knew nothing of any skill-trade let alone going out of her neighbourhood to access any potential market whatsoever. Kulsoom had a lot to thank for his deceased father who was although a peasant and spend his whole life working in the fields, he never owned, yet he made sure his eldest child would get high school education from a local girls high school. However she rarely stepped out of her village and knew nothing of the world that lies beyond her village, the facilitation centre proved to be the window Kalsoom would take refuge in, learn the skill and put it into good use of earning sustainable livelihood. With her father’s demise and being eldest in the family of four sisters and four brothers, Kulsoom had to shoulder the responsibility of earning a livelihood. This is where she got into contact with other girls who came from the same background and shared this strong desire to make a difference in their lives and while doing so, would be able to take their destinies in their own hands.

Kulsoom indeed is one of those 1,100 stories whom the project is helping to stand on their own feet and contribute to a stable and prosperous Pakistan. She along with 19 other girls were identified under the Skills for Market linkages initiative and the Chak #345 facilitation centre was established to train and equip these 20 local rural women who were first provided with the six-month training of commercial tailoring followed by training to create market linkages. Not only that, these group of girls were encouraged to create business clusters thus to induce a sense of collective entrepreneurship not to mention they were provided with the quality toolkits which included sophisticated and multi-functional sewing machines. Resultantly, Kulsoom and her partners launched a brand-name of their own ‘Libas’.

The market linkages program linked Kulsoom and co with the country’s main commercial hubs and paved the way for an increased number of orders. Earlier, the women working at the centre were only trained in stitching female clothes. After the training, they are now skilled in stitching male clothes as well. With improved market accessibility through the initiative’s help, the centre started receiving orders from as far as Azad Jammu & Kashmir to Karachi. They have also made good use of social media by creating a Facebook page for the centre, which has helped them with their outreach and resultantly getting more orders. The workers linked with the centre, enable these girls to earn PKR 10,000-12,000 each on average thus contributing to the family income and their better livelihoods.

Kalsoom while talking to the scribe said, “Who would have thought that one day we will be able to sell our brand-name to the far corners of the country. You see we live in a traditional and orthodox society which limits our interaction with the outer world, yet we still be able to access markets we didn’t even heard before. Thanks to PYWD, it seems sky is the limit and we are going from strength to strength”

Qaisar Nadeem, Chief of Party, Punjab Youth Workforce Development (PYWD) said that the PYWD Project strongly believes in providing equitable access to economic opportunities to women, in its focus districts of South Punjab. In its commitment to elevate the status of underprivileged sections of society, especially women in focus districts of South Punjab, the USAID-PYWD Project in partnership with Punjab Skills Development Fund (PSDF) initiated a special one-year-long program, Skills for Market Linkages, he added.

The Skills for Market Linkages program is a blend of technical and entrepreneurial skills development and it aims to improve market access for 1,100 rural women from the far-flung areas of South Punjab. The one-year-long three-phase program included: four-month theoretical training, two-month hands-on training, and six-month training skills for market linkages. The beneficiaries have been trained in three trades including; Commercial Tailoring, Hand Embroidery, and Adda Work (fabric embellishment).

Punjab Youth Workforce Development (PYWD) has placed 8976 (44 percent females and 56 percent males) youth through career counselling, on-job trainings, self-employment and entrepreneurship. Under this project, 947 toolkits have been distributed among the graduated women in three aforementioned vocational trades. These skilled women are now equipped with quality tools as well as connected with their relevant markets, which will result in better economic opportunities for them. Due to these toolkits, the trained rural women are now running their own business hubs and facilitation centres as well as utilizing their acquired skills and toolkits at their own homes as per their requirement. In this perspective, 47 business hubs are established in the graduated females’ houses where 4-5 trainees are working as a group and fulfilling the local market needs. Whereas in the 30 established facilitation centres, a group of 20 trained graduates are taking orders from the market and thus making gainful earning.