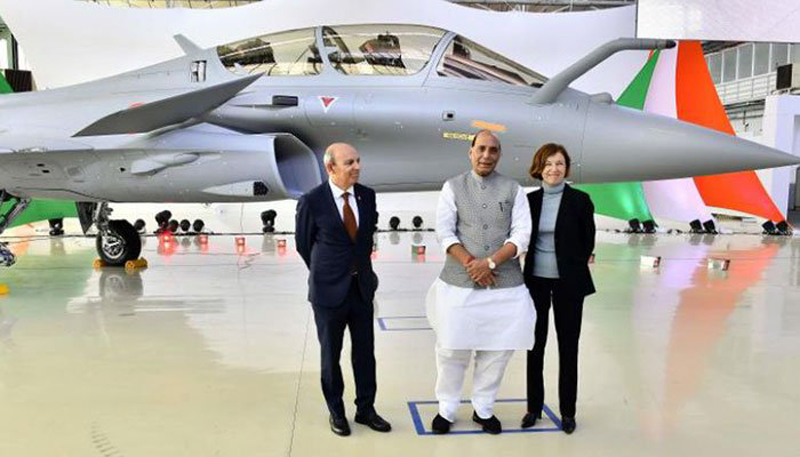 PARIS: India received Tuesday the first of 36 Rafale fighter jets ordered from France in 2016 in a multi-billion-dollar deal that Paris hopes will unlock more sales despite being tainted by suspicion of corruption.

Defence Minister Rajnath Singh joined his French counterpart Florence Parly for a ceremony at the Dassault Aviation factory in Merignac, near the southwestern city of Bordeaux, on the Indian Air Force’s birthday.

Standing next to the plane, decorated in the colours of the Indian flag, Singh hailed a “historic and landmark day for the Indian armed forces,” noting the Rafale “will add to the strength of our air force.”

India signed a deal in 2016 to buy 36 Rafales from France, but delivery has been held up by corruption allegations levelled by the opposition Congress party.

Prime Minister Narendra Modi has accused Congress of undermining the country’s security, saying the occupied Kashmir skirmishes would have ended “better” for India if it had had the Rafales.

French plane-maker Dassault in 2012 won a contract negotiated under a Congress-led government in 2012 to supply 126 jets to India, with some built-in France and the rest in India by state-owned Hindustan Aeronautics Limited (HAL).

But on a visit to France in 2015, Modi scrapped the deal, replacing it with an order for 36 jets — all to be built in France. The deal was estimated to be worth $9.4 billion (8.5 billion euros) at the time.

Modi and the government deny any misconduct, and in December, India’s top court dismissed calls for an investigation into the deal, saying it saw no evidence of “commercial favouritism”.

The Indian Air Force is meant to have 42 squadrons but struggles to put together 33, according to the International Institute for Strategic Studies.

“Combat aviation for them is… a strategic asset,” said Jean-Paul Palomeros, former chief of staff of the French Air Force and an expert at the CEIS strategic intelligence firm.

“As such, its renovation is both political and a high military priority.”

As part of Modi’s “Make in India” programme to encourage local manufacturing, the Rafale contract provides for domestic “offset” deals.

“Nearly 60 French companies are already established in India… and in the future more companies will come,” said Parly, the French defence minister.

The Rafale has been used by the French army since 2004 but struggled for several years to land foreign clients.

France finally security contracts with Egypt and Qatar in 2015, for 24 jets each, on top of the Indian deal.

The 36 Indian Rafales will be based in Ambala and at Hasimara in West Bengal state near the border with Bhutan.