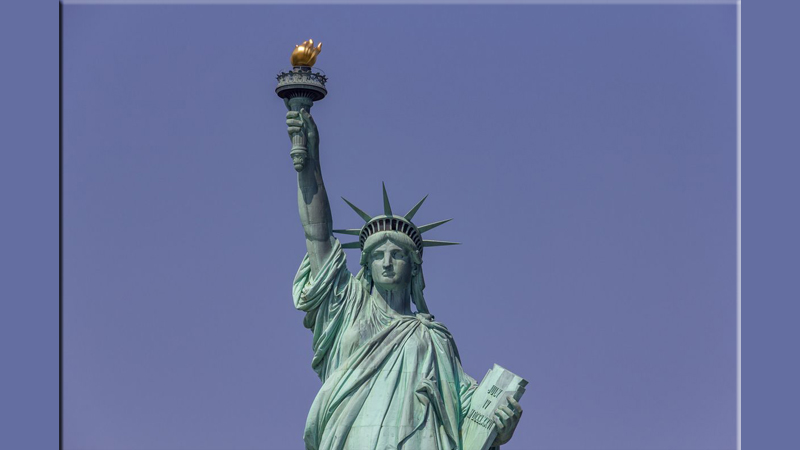 At an island near the New York Harbour stands the magnificent Statue of Liberty, a masterpiece of colossal statuary. With a torch in her raised right hand and a tablet in her left hand Lady Liberty, clad in a robe with beautiful undulating folds, represents the history of the land of opportunity; The United States of America.

The statue was a gift from France on the 100th anniversary of American Independence in 1876.

The project was a joint effort between the two countries in honour of the lasting friendship between the people of the two nations. The task of sculpting was given to a famous French sculptor Frédéric Bartholdi. He created the ‘skin’ of the statue with hammered copper sheets and designed the face of the statue after that of his own mother. The iron and steel framework on which the skin of the statue was to be placed was engineered by Gustave Eiffel. On the other hand, fundraising was being carried out in the United States in order to build the pedestal upon which the majestic statue would rest. After completion, the statue was disassembled and shipped off to ‘the land of the free and the home of the brave’.

The statue after its arrival on June 17, of 1885was placed on the pedestal, where it still stands today, and was dedicated by the 22nd President of the United States, Grover Cleveland, who spoke these words: “We will not forget that Liberty has here made her home; nor shall her chosen altar be neglected.” The statue with its colossus structure and sublime appearance represents a 19th Century successful attempt to bring together art and technology. Standing at 305 feet with a weight of 450,000 pounds, this masterpiece was taller than any building at that time in New York and it was built in a very subtle way to enable it to endure the strong winds of the island.

The Statue of Liberty holds a symbolic value in that it represents the establishment of the principles of freedom and democracy by the United States of America’s Declaration of independence. Over time it came to be known as the ‘Mother of Exiles’, showing that America welcomes all the immigrants of the world; the land which provides boundless opportunity to all those who seek freedom and want democracy to prevail. On a memorial tablet in the pedestal is engraved a sonnet, The New Colossus, written by Emma Lazarus in 1883. Some of her words are, “Give me your tired, your poor/Your huddled masses yearning to breathe free/The wretched refuse of your teeming shore/Send these, the homeless, tempest-tost to me/I lift my lamp beside the golden door!” which conveys to all the spectators that this statue is an embodiment of the supreme ideals of liberty, peace, human rights, abolition of slavery, opportunity and democracy.

History must not be forgotten for it serves not only as a record of past but also provides an opportunity for a progressive present and bright future. Unfortunately, we see that with Donald Trump as the president of the United States of America not only the ideals for which the Statue of Liberty stands have been forgotten but also those ideals have been ruthlessly attacked. The land of opportunity has closed its gate to those who seek freedom and a better life; the mother of exiles has transformed into a monstrous creature who no longer welcomes the immigrants; peace has been pushed to a corner in order to achieve specified ends; slavery has not been abolished, instead, it has taken a new form as economic slavery and the ideals of democracy have lost all their significance. June 17 should never be forgotten for on this day Lady Liberty arrived in the United States of America to break all the fetters and to emancipate humankind from all the oppressive structures.

The writer can be reached at shahameerkhan171@gmail.com